Happy Hardy and Heer Teaser: Double Dose of Himesh Reshammiya Will Give You Double the ‘Suroor’ – Watch Video

The first teaser of Himesh Reshammiya starrer Happy Hardy Aur Heer has hit the internet. The trailer features Himesh in double roles. Sonia Mann stars as the female lead who has to pick a guy for her between the two men. 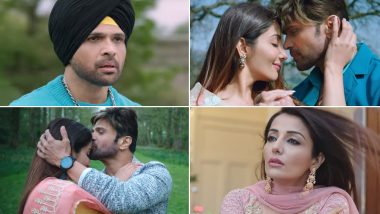 We were pretty excited when the motion posters of Himesh Reshammiya's next film Happy Hardy and Heer dropped on the internet. We are totally feeling like dancing to a mixtape of Himesh songs as the first teaser of the film hits the internet. This is an emotion that only true blue Himesh Reshammiya fans would understand. A three-minutes long teaser of Happy Hardy And Heer has been released by the makers and we Himesh bhai in it with his swagger at an all-time high. That is not all. The actor plays dual roles in the film, which means a double dose of HR.

Happy Hardy And Heer features Sonia Mann as the heroine who has to pick between a perfect guy for marriage between the two men, played by Himesh. There is also a scene which shows a dapper Himesh getting into an accident, which gives off a very Kaho Na Pyaar Hai-ish vibe. The Kapil Sharma Show: Sony TV’s Superstar Singer Judges Alka Yagnik, Himesh Reshammiya and Javed Ali Add a Musical Tadka To The Show!

Watch the Teaser of Happy Hardy And Heer Here:

Since it is a Himesh starrer film, which proudly calls itself the biggest and cutest musical of the year, will surely be peppered with good music. Barring the last track, the glimpse of songs that we get in the trailer doesn't impress much though.

The full-fledged trailer of Happy Hardy and Heer will drop in August. The movie, which has been entirely shot in Glasgow, will release in September, 2019. The exact release date of the film has not been revealed yet. Produced by Deepshikha Deshmukh, Sabita Manakchand, the movie has been directed by Raka.

(The above story first appeared on LatestLY on Jul 16, 2019 02:59 PM IST. For more news and updates on politics, world, sports, entertainment and lifestyle, log on to our website latestly.com).