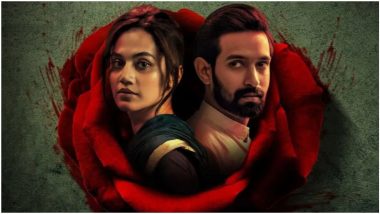 After making the unusual romcom Hasee Toh Phasee, director Vinil Mathew returns to making an unusual love triangle in Haseen Dillruba. Releasing straight on Netflix, Haseen Dillruba is written by Kanika Dhillon and stars Taapsee Pannu, Vikrant Massey and Harshvardhan Rane in the lead. It's a twisted romantic drama about a young married couple going through some crazy upheavals after the wife falls for the husband's cousin. The situation is make further complicated when this love story is told to us through an investigation procedure, after the husband Rishu (Massey) is allegedly killed in a cylinder blast at their home, and the wife Rani (Pannu) is believed to be behind the 'murder'. Haseen Dillruba Movie Review: Taapsee Pannu, Vikrant Massey and Harshvardhan Rane’s Twisted Love Triangle Is Quite a Drag!

So did Rani and Rishu's marriage overcome the revelation of the extra-marital fling? Did Rani and her lover kill Rishu? Where is Neel (Harshvardhan Rane), the lover? What does Dinesh Pandit, the author of Rani's favourite pulp fiction novels, has anything to do with the mystery?

Let's decode the finale of this romantic thriller, which I don't really need to say, would be very SPOILER-ish. So DO NOT READ ahead, if you haven't watched Haseen Dillruba and are planning to do so.

So in the end it turns out that it wasn't Rishu who was killed in the blast, but Neel. Neel was killed (not deliberately) by Rani when she hit him with a frozen leg of mutton. It is a throwback to the fact that the first time she brought mutton to the house was to make mutton curry for him, thus making it a cruel ironical fate for his betrayal.

Rishu, not wanting to ruin their newly-renewed romance in marriage over a dead blackmailer, convinces Rani that they have to hide the murder. To do so, they have to make it look like it was Rishu who was killed in a cylinder blast. Rishu, who is so desperate in love with her, even self-amputates his left hand that has Rani's tattoo on it, so that the police thinks it's him. By sending Rani out to the market (and dispose off the 'murder weapon'), he clears her off the crime scene.

Rishu also wears Neel's clothes and tries to make his escape by swimming in the river. Though how he survived swimming those strong currents with tremendous loss of blood and the fact that he doesn't have one hand, only the makers can answer that! Maybe it is the power of maddening love that saved him, something that Rani keeps telling the police. Even if Human Physiology says, not possible!

The idea to escape out of the murderous sticky situation came to Rishu after reading one of Rani's favourite novelist Dinesh Pandit's books. The same book which the inspector, played by Aditya Srivastav, gets to read after five years and decodes how they got away with the murder. This feels somewhat inspired by how in Drishyam, Georgekutty saves his family from getting implicated in a murder, by using his love and knowledge for films, through a combination of deliberate misdirection and gaslighting.

And since it was Neel who was killed and not Rishu, which is also why perhaps Rani was not caught in the lie detector test. After all, she was only asked if she killed Rishu, or if Neel killed him, and none of that happened really. Though it is strange that the police dismissed the case against her despite reasonable doubt. OTT Releases Of The Week: Haseen Dillruba On Netflix, Cold Case On Amazon Prime, Samantar Season 2 On MX Player And More.

I also want to believe that Rishu's parents knows that he is alive, since they don't really blame Rani for his death (his friend did, though). Even when the affair came out in public.

In the end, Rani gets her love back just the way she wants her ideal man to be - passionate, gutsy and mad. Thankfully, the need to have two hands was not included in her wish-list. Haseen Dillruba is streaming on Netflix.

(The above story first appeared on LatestLY on Jul 02, 2021 06:09 PM IST. For more news and updates on politics, world, sports, entertainment and lifestyle, log on to our website latestly.com).