Janhvi Kapoor Shares a Rare Pic of Parents Sridevi-Boney Kapoor and Fans Are All Hearts for It! 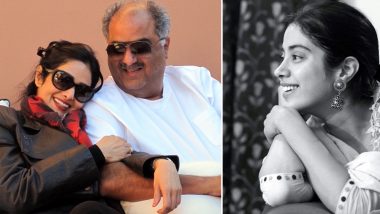 There is a very special reason why Janhvi Kapoor has shared a rare picture of her parents, Sridevi and Boney Kapoor. On this date, late actress Sridevi and Boney Kapoor tied the knot. Yes, on June 2, 1966 the couple became married and led a beautiful life together. They are blessed with two beautiful girls – Janhvi and Khushi. Sridevi’s death came as a shock not just to the family members but to the entire industry and fans of the actress. Mother’s Day 2019: Janhvi Kapoor Remembers Mom Sridevi; Her Emotional Post for the Late Actress Will Melt Your Heart.

This beautiful picture of Sridevi and Boney Kapoor has made many hearts smile. Fans of the late actress and the Kapoor clan are all hearts for the picture that Janhvi Kapoor has shared on Instagram. This picture shows Sridevi and Boney having a hearty laugh and we think, it is the perfect picture to mark the special day. Though Sridevi has passed away, neither the family nor her fans will be ever able to forget her. Her contribution for Indian cinema will always be cherished. Janhvi Kapoor Used to Drink Milk from a Bottle Until She Was 12, Reveals Her Sister Khushi – Watch Video.

Sridevi passed away before the launch of her daughter Janhvi Kapoor’s debut film, Dhadak. The journey for Janhvi wasn’t easy as she missed her pillar of strength when she was about to make a mark in the world of showbiz. Presently, this young starlet is working on the film based on IAF pilot Gunjan Saxena’s life, Kargil Girl.

(The above story first appeared on LatestLY on Jun 02, 2019 03:16 PM IST. For more news and updates on politics, world, sports, entertainment and lifestyle, log on to our website latestly.com).