Juhi Chawla Birthday Special: Did You Know She Almost Romanced Shah Rukh Khan, Mammootty and Mohanlal in a Single Movie? This Picture Is Proof!

Juhi Chawla has turned another year younger on November 13, 2019. On behalf of LatestLY desk, we wish the chirpy actress with an untapped range of versatility, Many Many Happy Returns of the Day. 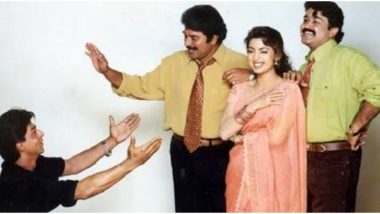 Juhi Chawla has turned another year younger on November 13, 2019. On behalf of LatestLY desk, we wish the chirpy actress with an untapped range of versatility, Many Many Happy Returns of the Day. The actress who used to reign at the top during the late '80s and the '90s as the lead actress, nowadays make occasional appearances in movies. In the '80s and the '90s, Juhi gave us hits like Qayamat Se Qayamat Tak, Darr, Hum Hai Rahi Pyar Ke, Yes Boss, Aaina, Deewana Mastana etc. And like some of the actresses in her peer club then, Juhi had also made occasional foray into South Cinema. Juhi Chawla Birthday Special: 7 Roles Of The Actress That Are A Must Watch For Every Bollywood Fan.

One such foray was the Malayalam film Harikrishnans. The 1998 superhit film was directed by Fazil, who the present generation knows as the father of National Award-winning actor Fahadh Faasil and whose previous movie was the all-time blockbuster Manichitratazhu. Before release, Harikrishnans made the headlines for bringing together superstars Mammootty and Mohanlal as the main leads after a gap of eight years, as well as being the Malayalam debut of Juhi.

After the release, Harikrishnans made news for having two different endings! Yup, that happened! One of the movie's main themes was having the two main leads woo Juhi's character, and in the ending, asks her to choose one of them as her life-partner, and the other as her friend.

This alternate ending was played in areas where Mammootty's fanbase was stronger. However, the Censor Board and the media got a whiff of this double play. The Board raised objection over having a print whose scene was not cleared with them. The media criticised the director for playing with the fans' sentiments. After the outrage became stronger, Fazil retained the original ending where Mohanlal's character weds Juhi's.

However, there was a third ending too, that never made it to the theatres. In this ending, another character comes in and sweeps the heroine off her feet, and that was to be played by Juhi's good friend, Shah Rukh Khan. The makers had even shot for a promotional still where Shah Rukh Khan was seen on his knees asking for Juhi's hand, while the actress is flanked by Mammootty and Mohanlal.

. @iamsrk shot for one of the climaxes of Malayalam movie #Harikrishnans (1998) feat. @Mohanlal @iam_juhi and #Mammooty.

It didn't made it to the final cut. pic.twitter.com/0hE1XgZJpK

Shah Rukh Khan has a huge fanbase in Kerala, and this ending would have created a tremendous buzz in the state. Just a year back in 1997, Bollywood star Anil Kapoor's surprise cameo in the Priyadarshan film Chandralekha (that was produced by Fazil) had left the Malayalam fans in a tizzy.

Returning to Harikrishnans, the SRK cameo was not canned because of some technical issues. But I believe it was not done because the scene would have made no sense, as Juhi's character never mentions having a secret lover anywhere in the film. Also, it would mean aggravating both Mohanlal and Mammootty fans, and that's the last thing Fazil would have wanted.

(The above story first appeared on LatestLY on Nov 13, 2019 02:41 PM IST. For more news and updates on politics, world, sports, entertainment and lifestyle, log on to our website latestly.com).