Kandahar: Ali Fazal Shares Pictures with Gerard Butler from the Sets of His Upcoming Hollywood Film

Actor Ali Fazal, who is currently busy with the shoot of his upcoming Hollywood film Kandahar, recently shared images on his social media where he can be seen standing next to co-stars Navid Negahban and Gerard Butler, with a rather quirky expression. 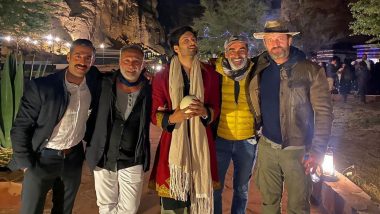 Actor Ali Fazal, who is currently busy with the shoot of his upcoming Hollywood film Kandahar, recently shared images on his social media where he can be seen standing next to co-stars Navid Negahban and Gerard Butler, with a rather quirky expression. The actor took to his Instagram and shared two images from an evening well spent. He wrote in the caption, "This one is for LOVE!! Christmas with the Kandahar gang!! Some here and some still on the dance floor.. and am sorry I have no freakkn clue why I am holding an ostrich egg in my hand!!! Or is it?? ( WELCOME TO JURASSIC PARK , T Afghan Rex ) (sic)." Richa Chadha ‘Mad Proud’ of Ali Fazal in Death on the Nile; Shares Beau’s Character Poster From Kenneth Branagh’s Crime Thriller.

He added in the caption, "I am sorry Gerry Butler I am just tagging you now.. gona shake things up at your instagram station a little..!! Navid jan, you are all heart and I love you . Thats all. Bahador meet me soon. Vas I got the reservation!!!!!!! @gerardbutler @bahador_foladi @navidnegahban @vassilis_kookie (sic)." Ali Fazal Shares A New Still From Death On The Nile And Compliments Co-Star Gal Gadot.

Bankrolled by 'John Wick' fame Thunder Road Films and Capstone group, 'Kandahar' which commenced shooting in Saudi Arabia's Al-'Ula in December, is based on true incidents as it draws inspiration from the life of a former military intelligence officer's experiences at the Defense Intelligence Agency in Afghanistan.

Ali Fazal With Gerard Butler and Team on Kandahar Sets

This film marks the first collaboration between Ali and director Ric Roman Waugh, who has previously worked with Butler in 'Greenland' and 'Angel Has Fallen'. On the work front, Ali is shooting for filmmaker Vishal Bharadwaj's directorial 'Khufiya' and is awaiting the release of his next 'Death On The Nile' based on the book of same name by Agatha Christie. The film is slated for a worldwide release on February 11.

(The above story first appeared on LatestLY on Jan 17, 2022 02:52 PM IST. For more news and updates on politics, world, sports, entertainment and lifestyle, log on to our website latestly.com).