Kangana Ranaut Labels Entertainment Journalists Guild of India as ‘Deshdrohi’; Twitterati Has a Mixed Response to Her Video! 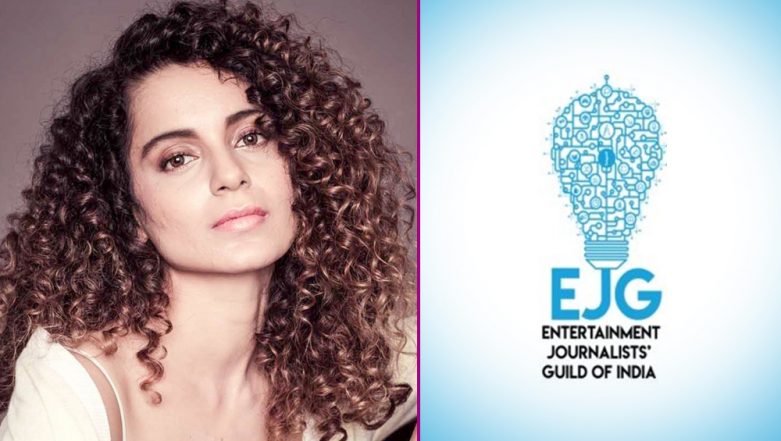 This morning Judgementall Hai Kya actress Kangana Ranaut’s video message created stirred another stir. She has not just refused to apologise to the Entertainment Journalists Guild of India, but Kangana has even labelled the fraternity as ‘deshdrohi’. In the video which is shared by her sister Rangoli Chandel, Kangana has challenged the fraternity to ban her. Kangana’s choice of words for the media has not been digested by some of the Twitterati. There has been a mixed response to the video which has taken the internet by storm. Kangana Ranaut Does Not Apologise, but Asks Media to BAN Her - Watch Videos.

Kangana Ranaut’s behaviour at the song launch event turned out to be ugly, after which the Entertainment Journalists Guild of India (EJG) demanded a written apology from her. Judgementall Hai Kya producer Ekta Kapoor issued an apology, however that did not work in Kangana’s favour. In one of the videos, Kangana stated in Hindi that three to four of them have made some Guild against her through which people have threatened the actress stating she’ll be banned or ruin her career. ‘Arre nalayakon, deshdrohiyon, bikau logon, tumlogon ko khareedne k liye lakhon bhi nai chahiye’, said Kangana in her video. Rajkummar Rao Supports his Judgemental Hai Kya Co-star, Kangana Ranaut in her Spat Against the Journalist.

Here’s a vidoe message from Kangana to all the media folks who have banned her, P.S she has got viral fever hence the heavy voice 🙂...(contd) pic.twitter.com/U1vkbgmGyq

Here’s what Twitterati have said:

I pity on these 2 psycos... You sisters need psychiatric help.. Get well soon.

This proves all the tweets by this account were written my Kangana herself.

Muft ka khana? How low for an actress. And pretty low intelectual maturity.

Wut? Deshdrohi? How did that even enter the conversation? I swear, she sounds crazier with every passing day.

She has lost it absolutely

Lololol now kangna certificates required for someone to be journo,n if some one by chance criticize or troll her he she will make him/her desh drohi

What a lady amazing

Kya doh dala. I respect truth and real . This girl is real . Get ready pseudo liberals for more shame

You’re unstoppable. Nationalists stands with you shoulder to shoulder. Keep up the good work.

Why so triggered if the journalist and guild is useless? Ignore and move on!

Paid media decimated. Well done #KanganaRanaut. This is the a reason your fans love you

The Entertainment Journalists Guild of India in their latest statement has stated that they will continue to support the film Judgementall Hai Kya, which is scheduled to release on July 26. In their earlier statements it was also clarified that the other casts in this film will not be affected with the ongoing issue. But after such response from Kangana Ranaut, we wonder what will happen next.