Kangana Ranaut Postpones the Release Date of Mental Hai Kya And You Can Blame Manikarnika: The Queen of Jhansi for It

Mental Hai Kya, directed by Prakash Kovelamudi, produced by Balaji Motion Pictures and Karma Media and Entertainment, celebrates the imperfections and the crazy within us 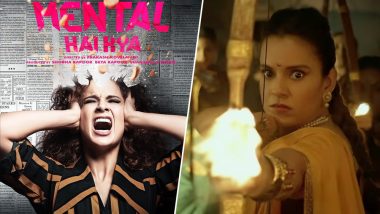 Kangana Ranaut and Rajkumar Rao starrer Mental Hai Kya was slated to release on March 29, 2019. However, now, Kangana has urged the makers to push the release date of the film to May. The reason? Well, it's Manikarnika: The Queen of Jhansi. According to reports, Kangana's last film Manikarnika, which released two months ago is still running in theatres. She wants to space out her films considering there is less gap between their release dates. Another reason why she postponed the release is because of promotions. Had the film released in March, she'd have had to go all- out with the promotions and the actress needs a break after Manikarnika, which released recently. Kangana Ranaut Accused of Stalling Mental Hai Kya Shoot; Producer Denies Incident.

Speaking about the film, it brings together Kangana and Rajkumar Rao together on the big screen after Queen. Since Stree, Rao has become a popular name in Bollywood. In an interview earlier, Kangy was quoted by a tabloid saying that she is trying to ensure that he doesn't steal the limelight from her since he is such a brilliant actor. She said, "He is a star today while still being a brilliant actor, so I will have to be on my toes to ensure he doesn’t steal the show from right under my nose."

Mental Hai Kya, directed by Prakash Kovelamudi, produced by Balaji Motion Pictures and Karma Media and Entertainment, celebrates the imperfections and the crazy within us and shouts out ‘Sanity is overrated’.

(The above story first appeared on LatestLY on Feb 28, 2019 09:30 AM IST. For more news and updates on politics, world, sports, entertainment and lifestyle, log on to our website latestly.com).