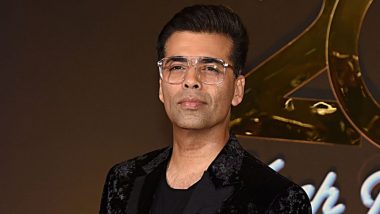 Karan Johar has issued a lengthy statement quashing the rumours of drug abuse and distancing his company from Kshitij Prasad and Anubhav Chopra. The crackdown by Narcotics Control Bureau (NCB) into Bollywood has made many prominent names to surface. Rhea Chakraborty is in judicial custody until October 6. Shraddha Kapoor, Rakul Preet Singh, Deepika Padukone, Sara Ali Khan have been summoned by the NCB. The infamous video from Karam Johar's party, that went viral in 2019, is being used by select media houses again. SAD leader Manjinder Singh Sirsa has claimed that Johar will be summoned by NCB again. Also, a few reports claim that Dharma Productions' alleged employee Khistij Prasad has provided a list of names to the NCB. Bollywood Drug Probe: Rakul Preet Singh, Deepika Padukone’s Manager Karishma Prakash Reach NCB Office.

Karan posted the statement on social media. He wrote, "Certain news channels, print/ electronic media and social media platforms, are wrongly and misleadingly reporting that narcotics were consumed at a party, that I, Karan Johar hosted on July 28, 2019, at my residence. I had already clarified my position way back in 2019 that the allegations were false." Bollywood Drug Probe: NCB Denies Getting Request From Ranveer Singh to Accompany Deepika Padukone During Questioning.

He added, "In view of the current malicious campaign. I am reiterating that the allegations are completely baseless and false. No narcotics substance was consumed in the party. I WOULD LIKE TO UNEQUIVOCALLY ONCE AGAIN STATE THAT I DO NOT CONSUME NARCOTICS AND I DO NOT PROMOTE OR ENCOURAGE CONSUMPTION OF ANY SUCH SUBSTANCE. "

Karan wrote that Anubhav was only associated with Dharma for two months as a 2nd assistant director for two months. Also, the director said that Kshitij joined Dhama's sister company on a contract basis for a project which did not materialise.

"However, in the past few days, the media has resorted to distasteful, distorted and false allegations. I hope the members of the media would exercise restraint else I will be left with no option but to legally protect my rights against this baseless attack on me," the statement concluded.

Kshitij was questioned by the NCB on Friday, after he was picked from his Versova residence. Anubhav was also questioned on Friday. Reports claimed that NCB has been able to procure more names from these two men in the drug probe.

(The above story first appeared on LatestLY on Sep 25, 2020 11:34 PM IST. For more news and updates on politics, world, sports, entertainment and lifestyle, log on to our website latestly.com).