During the live show on Roposo, when the Kuch Kuch Hota Hai director was asked who can portray his part best in his biopic, he said, I think Ranveer Singh. He is like a chameleon, and he will do his best." 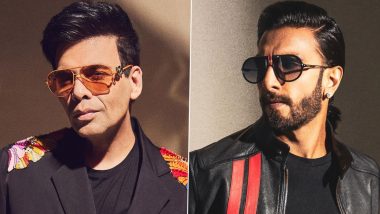 Filmmaker Karan Johar said that he wants Bollywood actor Ranveer Singh to be part of his biopic as he can play his part perfectly. Apart from this he also revealed that he wants his childhood to be depicted on-screen because he has amazing childhood memories and his parents taught him a lot of good lessons. Yodha: Karan Johar Announces New Release Date of Sidharth Malhotra, Disha Patani and Raashii Khanna’s Film With Intense Posters (View Pics).

During the live show on Roposo, when the Kuch Kuch Hota Hai director was asked who can portray his part best in his biopic, he said: "I think Ranveer Singh. He is like a chameleon, and he will do his best." Karan was born to film producers Yash Johar, and Hiroo Johar and made his directorial debut with Kuch Kuch Hota Hai. Later, he also directed Kabhi Khushi Kabhie Gham, Kabhi Alvida Naa Kehna, My Name Is Khan, Student Of The Year, and many more. 19 Years of Kal Ho Naa Ho: Karan Johar Shares Throwback Pics With Shah Rukh Khan, Preity Zinta, Saif Ali Khan; Says ‘I Will Forever Be Grateful to This Film’.

He shared that he wants his childhood to be shown in his biopic. As it was not only amazing but in a way unusual too and because of that he faced certain challenges. "My childhood, I had a wonderful childhood; my parents were so good to me and taught me the most amazing life lessons. However, it was also a little bumpy as I was an unusual kid and there were a few emotions that I festered as a kid. I was also different compared to the others, so I had to pay the price for it. It was tough, but also a very energizing time because when I look back, I feel like I learned a lot in that phase."

Karan also revealed that even though he is called KJo, he dislikes the nickname and would like people to call him Karan. He shared his wish to have international stars Ellen DeGeneres and Meryl Streep as guests on his talk show someday.

(The above story first appeared on LatestLY on Dec 01, 2022 04:12 PM IST. For more news and updates on politics, world, sports, entertainment and lifestyle, log on to our website latestly.com).