Karan Johar's Kids Yash and Roohi Break Into a Cute Dance on 'Aankh Marey' and We Bet Ranveer Singh and Sara Ali Khan Are Loving It Too! (Watch Video) 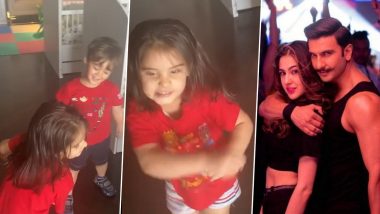 Karan Johar has been keeping us entertained amid this coronavirus quarantine with his hilarious Instagram posts featuring kids Yash and Roohi. 'Lockdown With the Johars' as the filmmaker calls it is a series of posts where his kids are seen doing all kinds of fun things at home, including taking digs at his fashion sense. From his fancy wardrobe to the swanky bathroom, we have now got a proper tour of the filmmaker's house thanks to his kids Yash and Roohi, who are often seen doing fun things at home. . Karan Johar's Singing Gives Headache to Yash and Roohi, Check Out Hilarious Video!

Another video from this lockdown series has now dropped and it's probably one of the best given that we see the Johar twins dancing like no one's watching. In the new video, Yash and Roohi are seen having a great time dancing to Ranveer Singh and Sara Ali Khan's song, "Aankh Marey" from Simmba. Sharing the video, Karan wrote, "We started the morning with a dance performance! Watch me being dragged to the dance floor!" It's absolutely cute how the duo are seen enjoying themselves. Karan Johar Treats Fans With A Glimpse Of His Tijori, Yash Confuses It As A Washing Machine (Watch Video).

Check Out the Fun Video Here:

We started the morning with a dance performance! Watch me being dragged to the dance floor! #lockdownwiththejohars #aankhmarey

It has been fun watching Yash and Roohi as their unfiltered selves in these hilarious videos. Recently, the brother-sister pair had explored the washroom where they had tagged the bathtub as a useless thing. Their amazing honesty is sure to make you laugh and we are loving this video series featuring the twins.

(The above story first appeared on LatestLY on May 15, 2020 01:10 PM IST. For more news and updates on politics, world, sports, entertainment and lifestyle, log on to our website latestly.com).