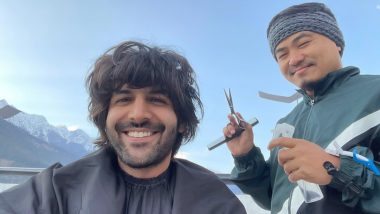 Kartik Aaryan is not only entertaining on the big screen but his Instagram posts are equally amusing. He kept all his fans entertained throughout the lockdown with his talk show and Tik Tok videos and his hair and beard also became a huge topic of discussion for his fans. The actor was sporting a heavy beard and long hair for the longest time and only said goodbye to his beard recently. It was now time for his hair. The actor got a haircut yesterday and is now flaunting his new super cool look on social media. Kartik Aaryan Trolled For Using a Basic Caption, Ananya Panday Not Spared Either.

Kartik had to be dramatic and entertaining while flaunting his new hairstyle as well so he decided to make a video about it. Since the actor is shooting in Manali and it is snowing there, he decided to make a Game Of Thrones-themed video. In the video, he can be initially seen standing with his back facing the camera. The theme song of GOT plays in the background and Kartik turns around and begins to walk in the snow. His head is covered with a cap as he looks from one to another enjoying the view. He then removes the cap and gives his fans a nice look at his haircut. The actor is looking dashing as usual in the video.

The actor is in the scenic hill town to shoot for his upcoming film, Bhool Bhulaiyaa 2. Earlier he had shared a picture where we could see him posing with his barber before he got a snip against the backdrop of snow-capped mountains. "Manali mein katega," Kartik wrote as the caption. The pictured had garnered more than 8 million views with fans expressing their excitement to see how Kartik Aaryan's new look will be like. Kartik Aaryan, the Chocolate Boy in a Teddy Bear Moschino Jumper!

(The above story first appeared on LatestLY on Feb 27, 2021 06:05 PM IST. For more news and updates on politics, world, sports, entertainment and lifestyle, log on to our website latestly.com).