Kartik Aaryan’s Sister Kritika Arrives at the Airport for a March-Scheduled Flight, Actor Mocks Her by Calling Her the ‘The More Educated Sibling’

The video posted by Kartik shows his sister standing at the entrance gate of the airport. She is seen showing her ticket to the police officials in order to enter the airport. 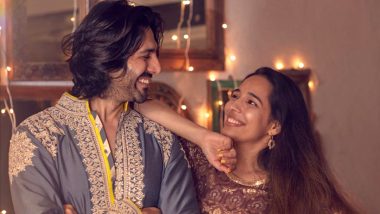 Kartik Aaryan's social media is a perfect blend of hot pictures of the actor and funny moments from his life. He is very active on social media and often entertains his fans with some family drama too. His mother and sister have appeared on his social media posts quite a few time and it is always hilarious to see the brother-sister duo create some funny video for their Insta fam to enjoy. Today, Kartik posted a video of his sister Kritika's departure at the airport only to reveal later that she has arrived at the airport earlier than she was scheduled to. Kartik Aaryan Cleans Dishes at Home and Sister Kritika Says, ‘Don’t Mistake This for Quarantine.

The video posted by Kartik shows his sister standing at the entrance gate of the airport. She is seen showing her ticket to the police officials in order to enter the airport. Kartik is standing behind the bars and recording his sister leaving. But while everyone thought she will go inside, Kartik's sister turns around and comes back to him. She reveals that the tickets have been booked for March and she has arrived earlier. Kartik bursts into laughter and captioning the image, he mocked his sister saying that she is 'The More Educated Sibling.' Kritika is seen asking her mother to book another flight for her. Check out the video below:

On the work front, Kartik along with Alia Bhatt have been approached for the lead roles for a Sharan Sharma film. A source revealed to Pinkvilla, Alia Bhatt and Kartik Aaryan are on top of Shahran’s wishlist. He has had a preliminary meeting with them for the film. However, he is presently in the stage of locking the final script, after which he'll have a few more meetings with the actors. The film is expected to roll by the end of the year." Kartik Aaryan Dislikes Sister Kritika’s Home-Made Rotis, Says ‘No Compromise With Quality’.

Apart from this, Kartik has Dostana 2 alongside Janhvi Kapoor and Lakshya Lalwani and a Shah Rukh Khan production film. He is also part of Ajay Bahl, Rohit Dhawan directed Ala Vaikunthapurramuloo remake and Bhool Bhulaiyaa 2. Kartik will also feature in a superhero film. He is also reportedly in talks with Sanjay Leela Bhansali and Aanand L. Rai for different projects.

(The above story first appeared on LatestLY on Feb 13, 2021 05:55 PM IST. For more news and updates on politics, world, sports, entertainment and lifestyle, log on to our website latestly.com).