The single is a coming-of-age hip hop banger that straddles the line between humility and confidence as he comes to terms with his legacy, reality and identity. 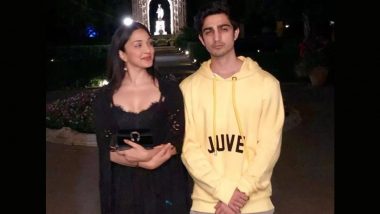 Bollywood actress Kiara Advani's younger sibling, Mishaal Advani, had made his foray as a rapper, composer and music producer with the release of his track 'Know My Name' which hit the airwaves on Saturday. The single is a coming-of-age hip hop banger that straddles the line between humility and confidence as he comes to terms with his legacy, reality and identity. Sidharth Malhotra and Kiara Advani Hunt Wedding Venues in Chandigarh – Reports.

The 27-year-old artiste started his innings in the creative realm of music at the age of 13. After working as a software engineer, Mishaal had a brief chance encounter with American hip hop legend ASAP Rocky in Los Angeles. This gave him the perspective and motivation he was seeking to pursue music as a full-time profession. Kiara Advani Looks Prepossessing in a Long Black Cut-Out Dress by Lakshmi Lehr (View Pic).

Talking about his musical journey, Mishaal said: "I've been in the studio for more nights than I've not, and this year marks 14 years since my first attempt at recording. I've really been blessed with being able to put together the right kind of music productions. It's time for that catalogue to speak for itself now, and with God's grace I'll be a meaningful member to the music community of the future." Over the next couple of months, he will be dropping new singles that will see him flex his lyrical sensibilities and hip hop aptitude.

(The above story first appeared on LatestLY on Nov 12, 2022 04:27 PM IST. For more news and updates on politics, world, sports, entertainment and lifestyle, log on to our website latestly.com).