Karan Johar took to Twitter to share the exciting news with everyone. He revealed that Andy Long and his team have previously choreographed the powerful moves for Jackie Chan and many other such films. 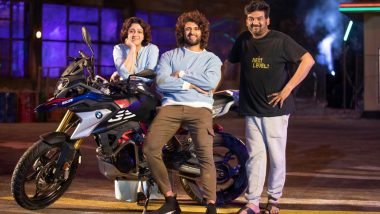 Liger starring Vijay Deverakonda and Ananya Pandey is one of the most anticipated films of the year. The team has been working on the film for quite some time now and the makers often share updates about the shooting of the film with the fans. It was just a month ago when the team had revealed that the film will be hitting the theatres this year, and now they have another exciting news to share with the fans. Hollywood stunt choreographer Andy Long has been roped into work on the film. LIGER: Karan Johar Shares Vijay Deverakonda's First Look as a Fierce Boxer in Puri Jagannadh Film.

Karan Johar took to Twitter to share the exciting news with everyone. He revealed that Andy Long and his team have previously choreographed the powerful moves for Jackie Chan and many other such films. He promised, "some action-packed moves are on the way." He shared a picture of Deverakinda standing with the team and smiling for a picture.

Thrilled to have the famous Hollywood stunt choreographer #AndyLong & team, who have previously choreographed the powerful moves for Jackie Chan and many other films, onboard for #LIGER! Some action packed moves are on the way!!@TheDeverakonda @ananyapandayy #PuriJagannadh pic.twitter.com/3WhOARa4EI

Vijay is all set to essay the role of a MMA (mixed martial arts) expert in Liger. Actors Ramya Krishnan, Ronit Roy, Vishu Reddy, Aali, Makarand Desh Pandey, and Getup Srinu are also a part of the film presented by Dharma Productions. In association with Puri Jagannadh's Touring Talkies and Puri Connects, the film is being produced jointly by Puri Jagannadh, Charmme Kaur, Karan Johar, and Apoorva Mehta. Directed by Puri Jagannadh, the film will be released on September 9 in theatres.

(The above story first appeared on LatestLY on Apr 07, 2021 11:18 AM IST. For more news and updates on politics, world, sports, entertainment and lifestyle, log on to our website latestly.com).