Johar, who is presenting the film via his Dharma Productions along with Apoorva Mehta, took to Twitter to share the first poster of the movie featuring Deverakonda as a boxer. 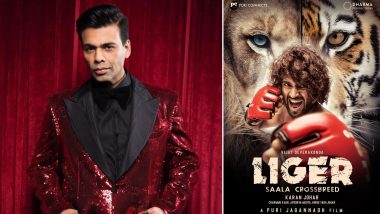 The project marks the first collaboration between Deverakonda and Jagannadh, who is best known for films such as Mahesh Babu-starrer "Pokkiri" and Amitabh Bachchan-fronted "Bbudadh... Hoga Terra Baap".

In an interview with PTI last year, Deverakonda said he would dub his own lines for the Hindi version. On Sunday, Johar had teased the title and first look reveal on Twitter. “Stories are not bound by languages anymore, their richness is quantified by their entertainment quotient, the places they take you and the way they make you feel at the core," he wrote. Liger: Vijay Deverakonda and Ananya Panday’s Film Gets a Title! Arjun Reddy Actor Turns Boxer in First Poster of Karan Johar’s South Foray (View Pic)

Vijay Deverakonda's First Look as a Boxer in Liger

"In the past years, we have presented stories that brought a never-seen-before cinematic spectacle to screens, appealing across regions to enthral one and all... We are adding another chapter in that journey, obliterating linguistic barriers to bring a new age of cinema. It's time to put your game face on,” the filmmaker added. "Liger" is Dharma Productions first pan-India project post the release of "Baahubali" franchise. The banner has also presented "The Ghazi Attack", which released in Telugu and Hindi, Madhuri Dixit-Nene starrer Marathi movie "Bucket List" and South superstar Rajinikanth-led "2.0".