Akshay Kumar starrer Sooryavanshi and Ranveer Singh starrer ’83 was scheduled to be released in theatres in May and April 2020, respectively. 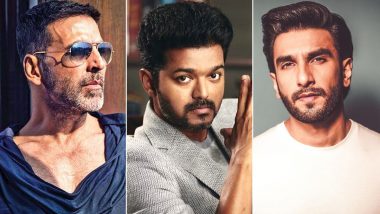 Akshay Kumar starrer Sooryavanshi and Ranveer Singh starrer ’83 was scheduled to be released in theatres in May and April 2020, respectively. However, the makers had to postpone the release dates owing to the coronavirus pandemic, due to which the theatres around the world also had to be closed down. Even Thalapathy Vijay starrer Master was originally planned to be released in cinema halls in April 2020. But nothing of it happened as planned, and the makers waited for the theatres to be re-opened, which happened almost after eight months. Master: Thalapathy Vijay Fans Worry Over The Film's Release After MHA Tells TN Government to Revoke Order on Theatres Having 100% Occupancy.

It was recently when the makers of Master, starring Thalapathy Vijay, Malavika Mohanan and Vijay Sethupathi in the lead, announced that the film is all set to hit the theatres on January 13, 2021. Now the makers of Sooryavanshi and ’83 are waiting to see the response that Master gets and accordingly will release one of the films in March 2021, around the time of Holi. Shibasish Sarkar, producer of Sooryavanshi and ’83, CEO of Reliance Entertainment group, told Mid-Day, “We are waiting for the January 13 release. There are four to five big releases in Tamil and Telugu cinema. There is a huge amount of confidence in the makers and the audience.” Ranveer Singh's '83 and Akshay Kumar's Sooryavanshi To hit the Screens in the First Quarter of 2021, Makers Yet to Finalise Release Dates.

Shibasish Sarkar also stated, “The situation in the country is improving as is the economy, so the mood is largely positive. A section of people headed to theatres to watch Tenet and Wonder Woman 1984. That was an encouraging sign. So, now, we are looking at bringing one of the films (Sooryavanshi or ’83) in the third week of March, during Holi. We have yet to decide on the film though.” Well, if the makers are able to release either of them during the time of Holi, it would indeed be a major treat for the audience after such a long time.

(The above story first appeared on LatestLY on Jan 07, 2021 08:34 AM IST. For more news and updates on politics, world, sports, entertainment and lifestyle, log on to our website latestly.com).