Hearing this news had left Thalapathy Vijay's fans thinking about the fate of his film Master. Twitter has been abuzz with discussions as to what the team of the film should do in such case. 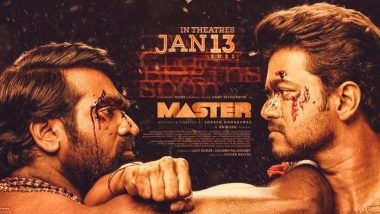 Thalapthy Vijay's fans were eagerly waiting to see the superstar on the big screen in Master after months of being in a lockdown. To get the maximum response from the audience, the makers of Master along with Vijay had met Chief Minister K Palaniswami earlier and requested them to allow 100 per cent occupancy in theatres. While the CM had obliged their request, the central government asked the Tamil Nadu government to revoke its decision and allow only 50 per cent occupancy. Withdraw 100% Movie Theatre Occupancy Decision, MHA Tells Tamil Nadu Government.

The Union Ministry of Home Affairs said, "Government of Tamil Nadu order of permitting increase the seating capacity of Cinema/theatres/ multiplexes from existing 50% to 100% is the dilution of MHA order. States and UT shall not dilute guidelines issued under DM act in any manner." The MHA added, "In view of the above, Govt of Tamil Nadu is requested to immediately issue necessary order to bring their Guidelines in line with the MHA guidelines dated 28 December 2020 and inform compliance to this Ministry."

Hearing this news had left Thalapathy Vijay's fans thinking about the fate of his film Master. Twitter has been abuzz with discussions as to what the team of the film should do in such case. They are eagerly waiting for the state government's decision and have also pitched in their ideas as to what they should do. Master: Setback for Thalapathy Vijay Fans in Kerala! Theatres To Not Reopen in the State For This Reason.

A user assured that regardless of the restrictions and the ongoing pandemic, the film will be a hit. They wrote, "No problem, safety is important too. Let it to be 50% occupancy, Vijay’s fans will definitely come and enjoy the movie. I am pretty sure despite of a pandemic, it will be worth watching on the big screen, Blockbuster."

My suggestion, they could have gone with 50%occupancy.. When govt decided to start vaccination on 13th Jan... Post 2-3 weeks hoping things will be normal. Aparam definitely 100% occupancy than. 🙂

If the theater owners allow the more than 50% people into the screen, what will be the action taken on the Theater owners? Will their license be revoked? If it is just a fine, they will risk it as they don’t care about people’s lives. They just want money from Master collection.

No problem, safety is important too. Let it to be 50% occupancy, Vijay’s fans will definitely come and enjoy movie. I am pretty sure despite of pandemic, it will be worth watching on big screen, Blockbuster 🔥🔥😎! #MasterFilm #JD #ThalapathyVijay @actorvijay !

Release in OTT or postpone release for another month or two if need 100% occupancy in theatres,let cases down globally and first round of vaccines getting completed

Very sad to hear this news for both #Eeswaran & #Master movies..😐🤐

Apart from this, Master's release in another south state has received a major blow. As per the latest reports, theatres in Kerela which were supposed to start operating from January 5 are not opening at all. It is being said that the exhibitors strongly feel that if the state government is not helping them with a package for services such as free electricity charges and tax waiver, there is no point for them to open the theatres and incur losses. Further, the distributors have their own set of demands. They are only willing for the cinema halls to open if the exhibitors clear their pending dues.

All this makes us wonder what Master's after would be considering that it is releasing in cinemas almost within a week (January 13). Helmed by Lokesh Kanagaraj, Master also stars Vijay Sethupathi, Malavika Mohanan, Andrea Jeremiah, Shanthanu Bhagyaraj and Arjun Das in pivotal roles. In the flick, Vijay is said to essay the role of a college professor.

(The above story first appeared on LatestLY on Jan 06, 2021 09:55 PM IST. For more news and updates on politics, world, sports, entertainment and lifestyle, log on to our website latestly.com).