Mika Singh: 'Sonu Nigam Ji and Bhushan Kumar Are Like Husband and Wife, When They Fight, Let Them Be' 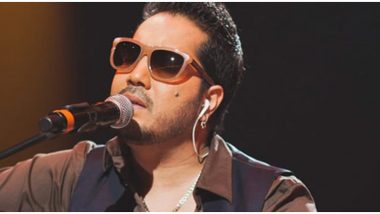 A new beef has surfaced between globally popular singer Sonu Nigam and T-Series head Bhushan Kumar. The former made a video asking Bushan to back off or he will release allegedly incrementing details of some matter. In response, latter's wife Divya Khosla Kumar made a video calling Sonu ungrateful. This won't be the first time the two men are at loggerheads. In the middle of this, Mika Singh has asked everyone to let them be. Divya Khosla Kumar Quoting Bhagvad Gita in Her Video Slamming Sonu Nigam Invites Trolls; Twitterati Gives Cook Sheru The Best Supporting Actor Of The Year Award (View Tweets).

"Sonu Nigam ji and Bhushan Kumar are like boyfriend girlfriend or husband and wife. Whenever they fight, you should let them be. Sonu Nigam ko banane wale bhi Gulshan Kumar the, so since then, they have a love-hate relationship and we should not get into it," Mika said, as per a report by Hindustan Times. Sona Mohapatra Slams Sonu Nigam For Defending #MeToo Accused Anu Malik and Claiming to Be in Possession of Marina Kuwar's Video.

"Sonu Nigam is saying he is not getting any songs but there are so many new singers who have gained immense popularity in the industry. There is Arijit Singh, Arman Malik, now of course, B Praak has made a name for himself. And apart from that, our singers from Punjab are continuing to do excellent work. Ab B Praak toh industry ke kisike bua ka beta nai hai. Bohot logon ka naam horaha hai and un mein se kaafi logon ko Bhushan Kumar ne hi break diya hai. Music labels can only give you a break, but after that, what happens with the song or the singer, whether they become successful or not, is not unto the label," Mika added.

(The above story first appeared on LatestLY on Jul 02, 2020 08:40 PM IST. For more news and updates on politics, world, sports, entertainment and lifestyle, log on to our website latestly.com).