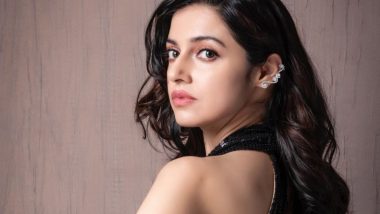 The Sonu Nigam vs Bhushan Kumar controversy has gotten on a whole new level. The blame game seems no end. Bhushan’s wife Divya Khosla Kumar shared a video on Instagram in which she has slammed Sonu Nigam by stating that the accusations made by the singer against her husband is false. Calling this video as ‘The Bitter Truth #SonuNigam', Divya has shared how T-Series gave Sonu and other outsiders opportunities in the music industry and helped them shape their career. While countering all the claims made by Sonu Nigam, Divya also introduced their cook Sheru in the video in which he has also spoken how Sonu came to Mumbai and he got the opportunity to work with T-Series. Divya Khosla Kumar Lashes Out At Sonu Nigam For Making False Allegations Against Her Husband, Bhushan Kumar (Watch Video).

Introducing cook Sheru wasn’t the only reason that gave rise to funny memes and jokes on Divya Khosla Kumar. Twitterati can’t keep calm after Divya also quoted Bhagvad Gita in this video. Bhushan Kumar’s wife stated in her video how she was confused whether she should reveal all the truth or not through this video and how she came up with a decision after she got an answer to deal this battle with the help of Bhagvad Gita. Within minutes, Divya started getting trolled on Twitter. From sharing pics from mythological and other comedy shows and films to calling Sheru the best supporting actor of the year, Twitterati is having a field day. Divya Khosla Kumar Calls Sonu Nigam 'Thankless' As She Responds to His Accusations Against Husband Bhushan Kumar and T-Series.

Cook Sheru Gets The Best Supporting Actor Of The Year Award

"Sheru tell us where are you from", sheru was about to tell his own story how he came to Mumbai to become a singer but unfortunately ended up being a cook in the Bhushan Kumar's house 😂😂

Everyone pls keep some sympathy for her 😂😂

After Watching Video Of #DivyaKhoslaKumar

And The Drama Queen Label

Divya Khosla Kumar also says Sonu Nigam is instigating all singers and other musicians against T-Series. She concludes her video by saying, whoever wants to be a part of such publicity, ‘The yuddh is on’.

(The above story first appeared on LatestLY on Jun 25, 2020 12:01 PM IST. For more news and updates on politics, world, sports, entertainment and lifestyle, log on to our website latestly.com).