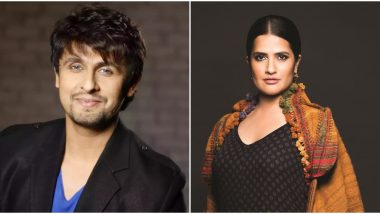 While the Bollywood music industry is currently busy taking sides, deciding to extend their support to either Sonu Nigam or Bhushan Kumar, Sona Mohapatra prefers staying aloof. While she insists the industry doesn't recognise new and deserving talents, she's also not willing to back Nigam's claims for his hypocrisy. Sona, who continues to voice her anger against the #MeToo accused in India has slammed Sonu Nigam for supporting Anu Malik earlier. Divya Khosla Kumar Quoting Bhagavad Gita in Her Video Slamming Sonu Nigam Invites Trolls; Twitterati Gives Cook Sheru The Best Supporting Actor Of The Year Award (View Tweets).

Anu Malik was among the many powerful names who was accused of #MeToo allegations. While his controversy had cooled down with time, Sonu Nigam was among his many supporters. And while she always slammed the singer for supporting the #MeToo accused, his recent revelation about being in possession of a certain Marina Kuwar video has upset her further. The singer took to her Twitter account to slam the singer for intentionally withholding evidence against the said accused. Sonu Nigam Threatens Bhushan Kumar That He'll Expose Marina Kuwar Video, Netizens React! (Read Tweets).

Check Out her Thread

Did anyone care that #SonuNigam publicly defended a multiple accused @IndiaMeToo predator Anu Malik & now claims to being in the possession & yet suppressing a video with incriminating evidence of another case? Do we really want the industry to get better? #LetsTalk #India. 🙏🏾🧚🏿‍♀️

The Indian music industry has always been a subset,an extension of the film industry & hence places too much emphasis on film music & mirrors the systemic problems of the film industry too.This has created a chronic lack of variety, quality & cultural influence in the recent past

While Highlighting How a New Talent in Strangled in the Industry

.. strangling any chance that real upcoming talent has considering a handful call the shots with bullies leading the pack. Almost everyone in the entertainment industry, no matter how rich or successful, seems to have a ‘struggler’ mindset, they refuse to feel secure. (3)

This has led to a myopic, short term view of the overall future of growing the industry because that can only happen by nurturing genuine talent of many hues & investing in the stars of tomorrow. Veterans like Sonu could help by being helpful to other upcoming talent too. (4)

Not To Forget the Gender Disparity

The gatekeepers,tastemakers of the industry would only benefit by adopting more inclusive practices that welcome diversity. The gender disparity itself is telling, there are no more than 8 odd songs in female voices for every 100 released in the mainstream. (5)

T Series' head honcho, Bhushan Kumar's wife, Divya Khosla Kumar has meanwhile waged verbal war against Sonu Nigam for targeting her husband. She tagged him as thankless in her long Instagram video but was trolled by netizens later.

(The above story first appeared on LatestLY on Jun 26, 2020 01:58 PM IST. For more news and updates on politics, world, sports, entertainment and lifestyle, log on to our website latestly.com).