Nawazuddin Siddiqui Birthday: Did You Spot the Actor in Late Irrfan Khan's Audition Tape for Body of Lies? (Watch Video)

We all know that the late actor Irrfan Khan had rejected a lot of Hollywood films including Leonardo Di Caprio starrer Body Of Lies. Now an audition tape of the actor for the same movie has surfaced on YouTube which also has Nawazuddin Siddiqui in it. Can you spot him? 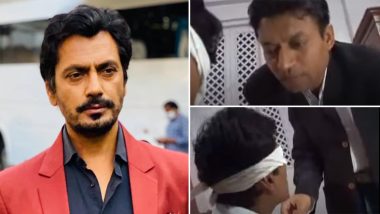 Nawazuddin Siddiqui celebrates his birthday today. He is a success story that never gets old. From doing odd jobs to stay afloat to becoming an actor of international repute, Nawazuddin has come a long way. In this journey, he has been quite close to the late actor Irrfan Khan. Many have even spoken about their rivalry. We are just glad that they have worked together and given us some amazing movies to watch. But would you believe us if we say that for Irrfan Khan's Body Of Lies audition, Siddiqui played a blindfolded guy? The video is still very popular on YouTube. Nawazuddin Siddiqui Birthday: Five Villainous Roles Of The Actor That Are Just Evil Incarnates

How do we know it's Nawazuddin? For one, even if he is hardly seen on the camera, you can identify him from his voice. Also, IMDb credits him as 'The guy in the blindfold' below the listing. Body Of Lies is one of the many Hollywood movies that Irrfan Khan had rejected. Check out the audition tape here...Nawazuddin Siddiqui Charges Rs 6 Crore, His Highest Ever Fee, For Bole Chudiyan? (LatestLY Exclusive!)

Post Irrfan Khan's demise, Nawazuddin took to Twitter to recount the time the actor had directed him. "'In d year 2000 a film directed by #IrrfanKhan named ALVIDA starred me & I ws lucky 2 hv my mentor as my co-star in many films." Both of them have worked in The Lunchbox, Paan Singh Tomar and many more films.

(The above story first appeared on LatestLY on May 19, 2021 11:49 AM IST. For more news and updates on politics, world, sports, entertainment and lifestyle, log on to our website latestly.com).