Pareeksha Movie Review: Prakash Jha’s Film Calls Out the Privilege Persisting in Our Education System With a Fine Performance From Adil Hussain 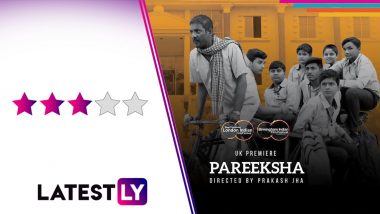 Pareeksha Movie Review: In 2016, the late Irrfan Khan's Hindi Medium looked at how screwed-up our education system is when it comes to admission process. However, it was from the point of view of the privileged with a sense of empathy for the poor, since the protagonists happened to be very well-to-do. Director Prakash Jha, known for his hard-hitting social dramas, takes a look at the same issue with his new movie, Pareeksha, but from the other side of the spectrum. The spectrum that are actually affected by the malpractices - the poor, the downtrodden and the underprivileged. Prakash Jha Lauds the New National Education Policy, Says ‘It Will Ensure Equal Opportunity for Children’.

Pareeksha is about Buchchi (Adil Hussain), a rickshaw-puller in Delhi who ferries a few students of a posh school, Sapphire, to and from their homes. His own son Bulbul (Shubham) is studying in a government school, and Buchchi has high dreams for him, as he expects an educated Bulbul to save them from their meagre existence.

Thankfully for him, Bulbul is intelligent enough, but the sad functioning of the government schools in the country makes Buchchi believe that his son has no future there. A stroke of unexpected luck gives Buchchi an opportunity to send his son to Sapphire. But is mere admission enough for Bulbul get acceptance in a system that has no pretence about seeking equality?

Pareeksha doesn't mince any words in showing how there is no fairness in the education system. When Buchchi tries to seek admission for Bulbul in the posh school, he is straightaway told that his son is better off in a government school and he can't fit in there. The argument has nothing to do with Bulbul's merit that hasn't even been tested. It's merely on the basis that the management thinks a rickshaw-puller's son might stand out like a sore thumb in their elite crowd.

Watch the Trailer of Pareeksha:

In another scene, a teacher insults the young Bulbul for not able to interpret English properly while loudly wondering how the school can allow admissions to such students. It is a scene that hits close to reality for me, when I faced transition from a government school to a posh college for my graduation studies, where my lack of spoken English was a subject of ridicule. If a somewhat privileged person like me faced these kinds of scenario, imagine what the kids coming from poor families have to go through in such situations.

But Bulbul as a character is far more assured and stronger than what his father gives him credit for. Earlier in the film, he decides to go in place of his ill mother (Priyanka Bose) to work in the mill that gets an angry admonishment from his father. Buchchi underestimates his son's talents, that he overarchs himself in trying make sure Bulbul fits in the school. His desperation lands Buchchi in a serious trouble, as he seeks unlawful ways to give his son what he sees as dream education.

As a film, Pareeksha works a strong statement putting the plight of Buchchi and his family against the privileged attitude of the education perks. It may not be among Prakash Jha's best works, but it is definitely motivational, and perhaps one of his more feel-good films to date. Not only does Pareeksha reflect the unfairness in even something as basic as education, it also calls out the mentality of the people looking down on government schooling for not having the same appeal as CBSE education. While Pareeksha does address the lack of orderliness in their functioning (a teacher skips class to pay her bills), we also have a good-hearted SP (Sanjay Suri) remind Buchi that successful people have also come out government schools.

The treatment at times feels caricaturish especially when it comes to how the secondary characters behave. The SP's portions in the film came more of a distraction rather than taking the plot ahead, giving an opportunity for Jha to enter the sermonising territory. It makes the third act feel weaker compared to the rest of the film. Such flaws take out the realism from the film, that already has a very predictable premise to deal with. Adil Hussain: Art Should Build Bridges and Not Burn Them.

But there is no denying that Pareeksha has its heart in the right place, and earns some delicious brownie points for that. And yes, it also helps that the three main leads are also too good in their roles. Adil Hussain is an amazing actor, who is still an underrated talent. Pareeksha is just another feather in his cap of some fantastic performances that he has given us, as the actor invokes pity and empathy from the viewers with a heartbreaking act and a believable body language.

However, the two actors who surprise us with their range are Shubham and Priyanka Bose. Shubham is really good in the final scene, where he takes a stand against the unfair treatment meted out to him by his school board. Bose is very natural, bringing both the vulnerability and spunk needed for the role. Sanjay Suri is very genial in an extended cameo.

- The Performances of the Leads

As a film, Pareeksha manages to score good marks with the viewer with its noble intentions and performances. The movie is streaming on Zee5.

(The above story first appeared on LatestLY on Aug 07, 2020 05:36 PM IST. For more news and updates on politics, world, sports, entertainment and lifestyle, log on to our website latestly.com).