Radhe: Salman Khan and Disha Patani's Romantic Song To Be Shot At THIS Location

It was supposed to shot in Azerbaijan but the team cancelled the idea due to war situation over there and also the pandemic. 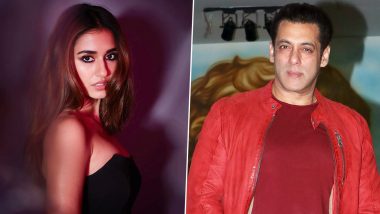 Bollywood industry is getting back on track after a long hiatus of Coronavirus lockdown. Salman Khan starrer Radhe is one of the films that has gone on floors again and is being shot in Karjat's ND studios. While many updates were here regarding its shoot, the latest one is about the song. The superstar is all set to shoot a romantic song with his leading lady, Disha Patani and the details of the same are out. Salman Khan Begins Shooting For Radhe Wearing A 'Not Louis Vuitton' Jacket (See Pic).

It was earlier rumoured that the song was omitted from the film along with a few action sequences. It was also supposed to shot in Azerbaijan but the team cancelled the idea due to war situation over there and also the pandemic. Now, for everyone's safety, the song is reportedly taking place at Lonavla's Amby Valley. Disha apparently rehearsed for 3 days in a studio before this shoot.

A source told Mumbai Mirror, "After shooting for some cop-centric dramatic scenes at ND Studios on October 2 and 3, the team is now in location for a romantic song featuring Salman and Disha. The location is not densely populated, but is naturally picturesque; the song will be shot with wide angle shots of the mountains in the background. It’s a two-day shoot featuring the lead pair, after which Salman returns to ND Studios again for 10 days, before moving to Bandra’s Mehboob studio for the patchwork." Stay tuned for more updates on this Prabhudeva directorial.

(The above story first appeared on LatestLY on Oct 05, 2020 10:10 AM IST. For more news and updates on politics, world, sports, entertainment and lifestyle, log on to our website latestly.com).