Rajesh Khanna is the man for whom the term 'superstar' was first coined as apparently, he was the first superstar of Indian cinema. 15 hits in a row are no mean feat and so, you will find many films that bear uncanny resemblances to his movies. So on his birth anniversary, let's talk about movies that are inspired from his movies 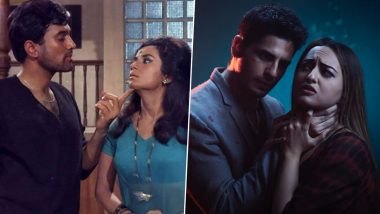 Rajesh Khanna had delivered 15 hits in a row, he was considered the first Superstar of Indian Cinema, letters in blood were written to him...Rajesh Khanna was a phenomenon! He was someone for whom the term superstardom was coined, the one who inspired millions to become an actor. We lost him in 2012 and since then, that's one void that has never been filled. Bollywood has seen even bigger superstars but none like Kakaji, as he was fondly referred to. Guess that could be a reason why, barring Ittefaq, none of his films were remade. But inspirations have been drawn by many. On Rajesh Khanna's birth anniversary today, let's talk about the movies that borrowed the germ of their concepts from these Rajesh Khanna films.  Did You Know Rishi Kapoor Had Directed Only One Movie and It Starred Akshaye Khanna, Aishwarya Rai Bachchan and Rajesh Khanna?

Of course, Ittefaq that released in 2018 was a complete remake of the 1969 original which was, in turn, a lift-off of an American movie called Signpost to Murder. A thriller which was one of the few no-songs movies didn't really make much mark, nor did the remake but it is still one of the best-made thrillers of India.

We would again like to clarify here that when we say inspired, we are talking about the germ of the idea and not the whole movie. Now Kal Ho Na Ho could be a cross between two of Khanna's movies, Safar and Anand. While Aman Shah Rukh Khan tries to bring smiles and cheer in Naina Preity Zinta's life, he also sets her up with Rohit Saif Ali Khan because he has a terminal illness. If you haven't watched Safar and Anand, you are missing out on the bests that Bollywood has ever produced.

Chakravyuh talks about a very serious issue of the Maoist revolution and the establishments' way of dealing with them but it is also about friendship. Like Namak Haram, a very well-placed man sends his friend to befriend a few rebels and learn all their secrets. All goes well till feelings get in the way. This could be a coincidental resemblance but we just can't dismiss it.

Bawarchi is one of Rajesh Khanna's most liked movies. We have emotions attached to this film which was a remake of a Bengali film of the same name. Hints of the same can be found in Hero No 1 where Govinda turns into an all-rounder chef in his girlfriend's house despite being the son of a rich man to please her grandfather. While the outcome is different in both, they have a similar approach.

Although Baghban is an unofficial remake of a Hollywood film Make Way For Tomorrow, it bears a lot of resemblance with Khanna's Avtaar. The parents are derided and humiliated by their own kids but are helped and supported by an adopted son. Eventually, they become rich again and their kids are remorseful. You didn't see that coming, did you?

We know many would vehemently oppose this but think about it. A bar girl catches the fancy of a gangster in Chandni Bar and gets a new life. In Amar Prem, Rajesh Khanna and Sharmila Tagore have a similar bond as well.

Karobar is an official remake of Indecent Proposal, of course, but the love triangle has been treated like in Aap Ki Kasam. Do make a point to watch the latter and you will know what we mean.

(The above story first appeared on LatestLY on Dec 29, 2020 08:20 AM IST. For more news and updates on politics, world, sports, entertainment and lifestyle, log on to our website latestly.com).