Kangana Ranaut's comment about Urmila Matondkar didn't go down well with anyone. While people trended #ShutUpKangana in support of the Rangeela actress, filmmaker Ram Gopal Varma too sided with his heroine. 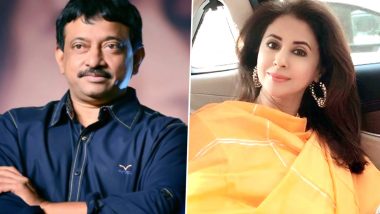 Kangana Ranaut has yet again opened her mouth to say things that can get anyone worked up. After Jaya Bachchan, a lot of B-town ladies have opened up about everyone trying to malign the entire film industry. Urmila Matondkar too slammed Kangana for her constant drug accusations on everyone in the industry. She had asked the Gangster actress to talk about drugs in her own state of Himachal Pradesh. Quite obviously, Kangana was asked to give her two cents on Urmila's reaction and the actress called her a 'soft-porn star'. People have slammed Kangana for such a comment and showed their support for Urmila. That also includes her Rangeela director Ram Gopal Varma. Urmila Matondkar Slams Kangana Ranaut, Asks Her to Start the Attack on Drug Problem in Her State

RGV tweeted that Urmila has more than proved her caliber as a versatile talent with movies like Kyon, Ek Haseena Thi and more. But he doesn't want to be part of this mud-slinging match.

Not wanting to get into slanging matches with anyone, I believe that @UrmilaMatondkar has more than proved her versatile talent in enacting such diversely complex roles as in RANGEELA,SATYA,KAUN,BHOOT,EK HASEENA THI etc .https://t.co/xjiSUW2kdB

To show their love for Urmila, people started trending 'ShutUpKangana' hashtag on Twitter. It seems people have finally realised that the actress has made this whole controversy that erupted after Sushant Singh Rajput's death all about herself.

(The above story first appeared on LatestLY on Sep 17, 2020 04:21 PM IST. For more news and updates on politics, world, sports, entertainment and lifestyle, log on to our website latestly.com).