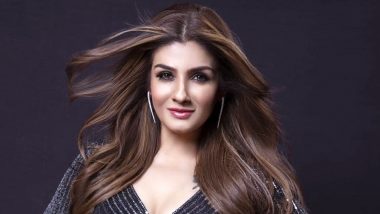 Sushant Singh Rajput's untimely demise has brought the topic of nepotism and groupism in Bollywood to the forefront. As a result of the same, many celebs without any fear are coming forward and sharing their version of realities. Now, one of the popular heroines from the 90s, Raveena Tandon is the latest one to narrate her ordeal of surviving in Bollywood. In an explosive interview with Pinkvilla, the actress has opened a can of worms and highlighted some harsh realities from her time. Tandon in a conversation with the portal revealed how she was tagged 'arrogant' as she did not sleep around with actors or agreed to whatever they wanted. Raveena Tandon Shares Pic of Holding Husband Anil Thadani’s Hand With Both Wears Gloves, Captions It ‘Love in the Time of Corona’.

She said, “I didn’t have godfathers, wasn’t part of camps and didn’t have heroes promoting me. I was not sleeping around with heroes for roles or having affairs. In a lot of cases, I was considered arrogant because I wasn’t pandering to what the heroes wanted me to do - laughing when they wanted me to laugh, sitting when they asked me to sit.”

Ahead, the "Tip Tip Barsa" fame also mentioned how during her times there were a few female journalists who never stood by her, instead were puppets to popular male actors. “There used to be these cabals which used to have the heroes, their girlfriends and their journalist chamchas. What used to shock me was that a lot of these female journalists would do something like this to another woman. When they now stand up and say, we’re feminists and writing ulta-feminist columns,” she added. Raveena Tandon Speaks About 'Bollywood Camps' and 'Mean Girl Gangs', Reveals How She Fought Back Dirty Politics in the Industry (Read Tweets).

Raveena in the chat also admitted paying no heed to negativity and added how she never lashed out at these people. Meanwhile, when Sushant Singh Rajput passed away, Tandon who is known to express her opinion no matter what the situation is had revisited her old wounds and admitted that Bollywood camps do exist. Stay tuned!

(The above story first appeared on LatestLY on Aug 05, 2020 07:25 PM IST. For more news and updates on politics, world, sports, entertainment and lifestyle, log on to our website latestly.com).