While Rhea's bail application was approved by Bombay High Court, her brother Showik Chakraborty's was denied. He will continue to remain in NCB's custody. 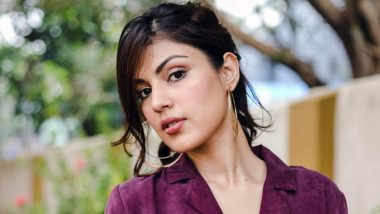 Rhea Chakraborty's bail plea was finally approved by Bombay High Court. The actress was granted bail on a personal bond of Rs 1 lakh. The actress was earlier arrested by Narcotics Control Bureau on the charges of handling and possession of drugs. Her bail application was earlier rejected by Sessions Court in the city, following which her legal team filed an appeal with the Bombay High Court. While Rhea's application was granted, her brother Showik Chakraborty will continue to remain in NCB's custody. 'Smash the Patriarchy, Me and You,' Twitterati Roar Rhea Chakraborty's T-Shirt Message! Here's Why the Slogan Stands Significant.

In its verdict today afternoon, the court put across a few restrictions against Rhea by stating that, "She should mark her presence for 10 days in the police station after release, deposit her passport, not travel abroad without court permission and inform the investigating officer if she has to leave Greater Mumbai." SSR Case: Rhea Chakraborty Mobbed by Reporters Outside NCB Office, NCW Chief Rekha Sharma Questions Work Ethics of Media.

Rhea Chakraborty gets bail on personal bond of Rs 1 lakh.

Court says, "Rhea should mark her presence for 10 days in police station after release, deposit her passport, not travel abroad without court permission & inform investigating officer if she has to leave Greater Mumbai" https://t.co/TBCLt1Cblx

Rhea's arrest started a vicious circle of drug probe in Bollywood where it was alleged that she had named actresses like Deepika Padukone, Shraddha Kapoor, Sara Ali Khan and Rakul Preet Singh in her interrogation as celebrity names who take drugs on a regular basis. While the names were called in for questioning, no evidence was established that would prove their connection to the alleged charges.

(The above story first appeared on LatestLY on Oct 07, 2020 11:36 AM IST. For more news and updates on politics, world, sports, entertainment and lifestyle, log on to our website latestly.com).