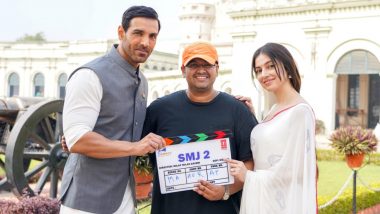 Actor John Abraham and Divya Khosla Kumar on Wednesday kick-started the shooting for the upcoming action-thriller film 'Satyameva Jayate 2' in Lucknow. The 'Dishoom' actor along with Divya and producer Milap Javeri has commenced the shoot for the much-anticipated sequel. In the pictures from Day 1 of the film, John is seen clad in a white kurta and a grey bandhgala jacket. He is also sporting a badge featuring the Indian flag above his left pocket. On the other hand, Divya looks stunningly beautiful in a red-bordered white saree. Satyameva Jayate 2: John Abraham’s Next to Have an Eid Release on May 12, 2021, Actor Shares his Bare-Bodied, Mustached Look in the New Poster

The actors have posed with the director Milap Zaveri in the first picture. On the sets of the film, producer Nikkhil Advani was also captured giving the Mahurat clap to initiate the shooting. Before the coronavirus struck, 'Satyameva Jayate 2 'was based in Mumbai. The director Milap Zaveri - confided that the roots of John's character in the film are in Varanasi. The transition will give the film a pan-India feel, appealing even to the viewers in the interiors, he said. Satyameva Jayate 2: Shooting of John Abraham and Divya Khosla Kumar Starrer Kicks Off in Lucknow!

John Abraham, Divya Khosla Kumar and Milap from the Sets:

FILMING COMMENCES IN LUCKNOW... Filming of #SatyamevaJayate2 - starring #JohnAbraham and #DivyaKhoslaKumar - has commenced in #Lucknow... Directed by #MilapZaveri... 12 May 2021 release. #Eid #Eid2021 pic.twitter.com/bKu390ESEr

The team will also be shooting for a few days at a Mumbai studio early next year before calling it a wrap. Produced by Bhushan Kumar, Krishan Kumar (T-Series), Monisha Advani, Madhu Bhojwani and Nikkhil Advani (Emmay Entertainment), Satyameva Jayate 2 is slated to release on May 12, 2021.