Siddhant Chaturvedi celebrates his birthday on April 29 and what a better day to know him better. So, we’ve decided to share some lesser-known facts about Siddhant that you are unaware of. Read on. 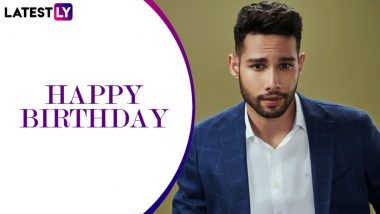 Siddhant Chaturvedi made his Bollywood debut with Gully Boy in 2019 and left an ever-lasting impression. His role as MC Sher in the film proved that the young lad is here to achieve heights. And why not? He has got looks, he’s a brilliant performer, and also is always hungry for more, which makes him different as compared to the other newbies in the industry. There’s this spark to his personality that’s unique. Having said that, the actor celebrates his birthday today (April 29), and what a better day to know him better. And so, we’ve decided to share some lesser-known facts about Siddhant that you are unaware of. Here, we go. Siddhant Chaturvedi's Fitting Reply to Ananya Pandey's 'Struggle' Comment Is Going Viral; Funny Memes and Jokes You May Have Missed.

Siddhant shifted to the city of dreams Mumbai at the age of 6 with his family. He is born in Ballia (Uttar Pradesh). Also, just like his father, even he's a chartered accountant and has completed his education at Mithibai College.

Well, rapper Vivian Fernandes aka Divine used to stay in Sid’s neighbourhood, but in a different locality. Even this close, the two never interacted with each other, but we all know how luck brought them together, all thanks to Gully Boy.

The b’dy boy as a child was fond of dancing. “I used to love it when people used to love me, clap for me,” he told a renowned portal. It was during his college days when he was into theatre. Siddhant Chaturvedi Looks Similar To Bridgerton Star Regé-Jean Page? Even The Gully Boy Actor Is Amused At The Comparison (View Pic).

The Language Barrier He Overcame

Talking about his school days, in an old interview, he had said, “Initially, I couldn't have a conversation with kids at school because I could only speak Bhojpuri.” “But eventually Hindi happened.”

Little did people know that Sid kickstarted his acting career with a YouTube web series titled Life Ho Toh Aisi and also played the role of a teenage cricketer in Inside Edge on Amazon Prime.

That’s it, guys! These are some of the less talked about pages from SC’s life. Workwise, the actor will be soon seen in Phone Bhoot and also in Bunty Aur Babli 2. Rise and shine, you are a rare gem. LatestLY wishes Siddhant Chaturvedi a very happy birthday.

(With Inputs from Mensxp)

(The above story first appeared on LatestLY on Apr 29, 2021 08:10 AM IST. For more news and updates on politics, world, sports, entertainment and lifestyle, log on to our website latestly.com).