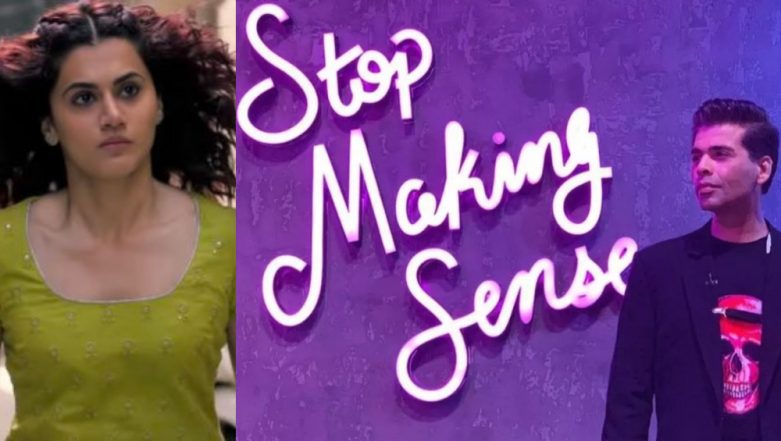 On the work front, Taapsee Pannu has a big movie coming out this month. Titled, Badla, the movie reunites the actress with Amitabh Bachchan, her co-star from the hit courtroom drama, Pink. Badla has been produced by Shah Rukh Khan. You can say that Taapsee has arrived. But maybe just not enough for Karan Johar. The actress was missing from the roster of celebrity guests from the sixth season of Koffee with Karan, which even included Ananya Pandey and Tara Sutaria, who are yet to make their movie debuts. Taapsee has also made a remark about her absence from KWK.

Proving herself to be adept with a sense of humour and wit, Taapsee keeps entertaining us through her social media pages and interviews. Today, the actress reacted to the newest promo of KWK wrap-up episode. The promo features comedian Vir Das cracking a joke that the new set of Koffee with Karan is so PINK, that Taapse tried to act on it. I’m Playing One of the Most Difficult Roles in ‘Saand Ki Aankh’: Taapsee Pannu.

Taapsee reacted to the promo with a tweet, saying, "Hahahahha nice one. Just that Taapsee still doesn’t qualify to be there, I am looking forward to seeing this episode. All you guys are hilarious (sic)"

Hahahahha nice one. Just that Taapsee still doesn’t qualify to be there 😅 I am looking forward to seeing this episode. All you guys are hilarious 🤗

While it may be a joke, we can see a tinge of stinging reality in those words. Here is how Vir Das reacted:

You're brilliant in everything you do. That's all the qualification you need! 🙂

Which led to Taapsee basically asking the comedian to take a chill pill, in much nicer words.

The final episode of Koffee with Karan 6 will feature Kirron Kher, Malaika Arora, Mallika Dua alongside Vir talking about the 20 episodes that aired. The jury will also pick the best episode and the best line of the season, which has an Audi car as the prize.