Actor Taapsee Pannu on Saturday said the last schedule of her upcoming film Rashmi Rocket will be shot in Bhuj. 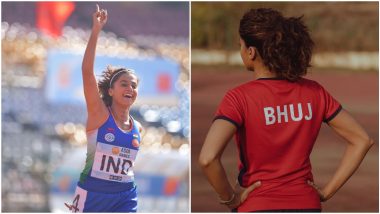 Mumbai, Jan 16: Actor Taapsee Pannu on Saturday said the last schedule of her upcoming film Rashmi Rocket will be shot in Bhuj. Set in Kutch, Gujarat, Rashmi Rocket stars Pannu in the title role of a gifted athlete and is directed by Akarsh Khurana, who helmed Irrfan Khan's Karwaan. Taapsee Pannu Talks About Getting Varicose Veins Operated and Removed Before Starting the Training for Rashmi Rocket.

The actor started filming for the sports drama from November last year. Pannu took to Instagram and shared a picture of herself on a race track, with Bhuj written on the back of her jersey. "Next stop.... #LastSchedule #RashmiRocket," the 33-year-old actor wrote.

The film, written by Nanda Periyasamy, Aniruddha Guha and Kanika Dhillon, also features Pataal Lok actor Abhishek Banerjee and Priyanshu Painyuli of Mirzapur fame. Pannu also shared a selfie on her Instagram stories, in which she is joined by her co-stars Banerjee and Painyuli on the flight.

Rashmi Rocket, produced by Ronnie Screwvala along with Neha Anand and Pranjal Khandhdiya, is set to release next year.