The Attacks of 26/11 stars Sanjeev Jaiswal as Ajmal Kasab, the only attacker to be captured alive and Nana Patekar as Joint CP, Rakesh Maria who was assigned the task of interrogating Kasab. 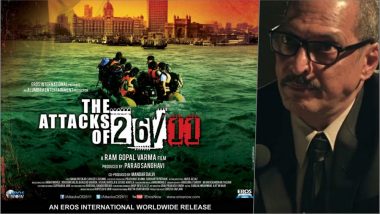 India is remembering the supreme sacrifice of all those heroes who laid their lives during the nightmarish 2008 Mumbai terror attacks. It is going to be eleven years since the 2008 Mumbai terror attacks referred to as ‘26/11’ took place. The heinous terrorist attack that shook the core of the maximum city will always remain etched in our memories. Post the 26/11 Mumbai terrorist attack, several documentaries and movies based on it have released. One such movie is Ram Gopal Varma-directed The Attacks of 26/11, which released in 2013. Starring Sanjeev Jaiswal as Pakistan terrorist Ajmal Kasab and Nana Patekar as joint commissioner of Mumbai police, Rakesh Maria. Most of us who are looking for information and details of the tragic incident, here’s The Attacks Of 26/11 full movie download or watch online options available. Apart from the 26/11 Mumbai terror attack movie watch online and download, the makers had provided the free preview of The Attacks Of 26/11 film on YouTube. 26/11 Mumbai Terror Attack: 10 Years After Attack, People Left With Faded Memories of the Mayhem.

2008 Mumbai Attacks took place for three days, from November 26-19 when ten heavily armed and fully prepared members of Lashkar-e-Taiba, an Islamic terrorist organisation based in Pakistan carried out shooting and bombings in the city. The 26/11 Mumbai terrorist attack resulted in the brutal killing of 160 lives, and worst turned the city into a war zone. The sight of Taj Mahal Hotel burning into flames or the horrific image of terrorist Ajmal Kasab firing bullets at Chhatrapati Shivaji Maharaj Terminus railway station (CSMT) and news of martyrs left every human enraged. 26/11 Mumbai Terror Attacks: Father Remembers Major Sandeep Unnikrishnan.

The incident saw the deaths of decorated officers such as ATS chief Hemant Karkare, Army Major Sandeep Unnikrishnan, Mumbai's Additional Police Commissioner Ashok Kamte and senior Police Inspector Vijay Salaskar among many who laid down their lives in the service of the nation. Everyone was glued to the TV following the ghastly updates and still were left with so many questions. With the aim of bringing out the real narration of the nightmarish event, RGV like many filmmakers and documentary-makers directed the movie The Attacks of 26/11.

As mentioned above The Attacks of 26/11 stars Sanjeev Jaiswal as Ajmal Kasab, the only attacker to be captured alive and Nana Patekar as Joint CP, Rakesh Maria who was assigned the task of interrogating Kasab. The plot of the film revolves around the attack on the first day, 26th November 2008 and especially the time when Kasab was caught. Patekar who has played the role of a police officer in several films including the directions of Ram Gopal Varma was appreciated for his performance. The Attacks of 26/11 preview video of a little more than 15 minutes is available for free watch online option on YouTube and if want to catch the entire movie on Eros Now, pay a small amount of Rs 25 to watch The Attacks of 26/11 full movie.

(The above story first appeared on LatestLY on Nov 26, 2019 11:10 AM IST. For more news and updates on politics, world, sports, entertainment and lifestyle, log on to our website latestly.com).