The Late Amrish Puri Beautifully Croons a Punjabi Gazal in This Throwback Video and It Will Definitely Give You Goosebumps! 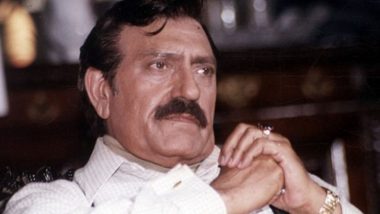 The late Amrish Puri's legacy will live on forever. Even after so many years of him leaving us, the actor's memories are fresh in every fan's mind. Be it his role as a doting father in DDJL or his evil character Mogambo in Mr India, Amrish Puri's contribution to the Indian cinema is limitless. His strong persona, his aura has no match and we know that there will be no other actor like him ever. From time to time, his fans remember the actor with old anecdotes, pictures, and videos and we happened to stumble upon one such memory. Amrish Puri Birth Anniversary: 7 Villainous Looks of the Actor That Completely Bowled Us Over.

In a video that we have discovered, Amrish Puri can be seen singing a Punjabi ghazal for a large audience. He begins by saying that since he never gets a chance to sing Punjabi gazals and has a large Punjabi audience in front of him, he will sing one song for them. He verses out the lyrics of the song and then begins to sing them. Veteran actor Ranjeet who is standing beside him cannot help but appreciate the soothing voice. The video gives us a glimpse of a totally different Amrish Puri and managed to give you goosebumps. Amrish Puri Birth Anniversary: 5 Interesting Facts About The Legendary Actor That Will Baffle You.

Back in 2020, Anupam Kher had posted a picture with the legendary actor and reminisced about their day together. He narrated a story and revealed, " I miss #AmrishPuri ji. He was the gentlest person I had the privilege to be friends with. He was calm and compassionate. He had a childlike innocence. And yet he played the toughest villains in Indian and international cinema. One of the most professional actors. Punctual and disciplined. He would often say to me, 'yaar! tu bada naughty bachcha hai!' Not many people have called me a bachcha (young boy). It felt great. And I would reply, 'Amrish Ji, tussi great ho!' And he would giggle like a baby. Amrish ji, you will always be great,"

Amrish Puri had passed away on January 12, 2005. He was battling a rare kind of blood cancer. The actor started his career in 1970 with the film, Prem Pujari while his last film was Kisna: The Warrior Poet, which released posthumously.

(The above story first appeared on LatestLY on Jan 12, 2021 06:00 PM IST. For more news and updates on politics, world, sports, entertainment and lifestyle, log on to our website latestly.com).