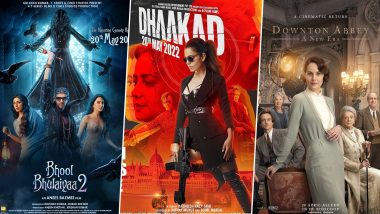 As we proceed past the mid of may there are 11 films lined up for release in India and moviegoers has something to cheer for. The two big releases of the week are Kartik Aaryan’s Bhool Bhulaiyaa 2, and Kangana Ranaut’s Dhaakad are the two big releases lined up to release in the theatres this week on Friday, May 20.  Helmed by Anees Bazmee, Bhool Bhulaiyaa 2 also stars Tabu and Kiara Advani in a major role and it is a sequel to Priyadarshani's 2007 film starring Akshay Kumar. On the other hand, the film might get a tough box office competition from Kangana Ranaut's actioner Dhaakad which also stars Divya Dutta and Arjun Rampal in crucial roles. Bhool Bhulaiyaa 2 Movie: Review, Cast, Plot, Trailer, Release Date – All You Need To Know About Kartik Aaryan, Kiara Advani, Tabu’s Horror Comedy.

Hollywood outing Downton Abbey: A New Era, the new movie sequel to the popular period drama is also arriving on the Indian screens this Friday. The film also stars Matthew Goode, Tuppence Middleton, Nathalie Baye, Laura Haddock, Hugh Bonneville, Laura Carmichael, Rob James-Collier, Allen Leech, Brendan Coyle, Joanne Froggatt, Hugh Dancy, Sophie McShera, Before you plan to watch a film in the cinema hall near you, Sam Rockwell's adventure comedy The Bad Guys is also set for a May 20 release this week. Before going any further let's take a quick look at every theatrical releases of the week (Friday, May 20) Dhaakad: Kangana Ranaut Claims Her Upcoming Actioner Has the Longest Fight Sequence in Hindi Cinema.

Theatrical Releases Of the Week - Friday (May 20)

(The above story first appeared on LatestLY on May 17, 2022 03:57 PM IST. For more news and updates on politics, world, sports, entertainment and lifestyle, log on to our website latestly.com).