Varun Dhawan Birthday: From Student Of The Year To October, 5 Best Films Of VD That Will Always Be Audiences’ Favourite

Varun Dhawan, who has turned a year older today, is the son of veteran director David Dhawan and Karuna Dhawan. On this special day, let’s take a look at VDs films that will always remain audiences’ favourite. 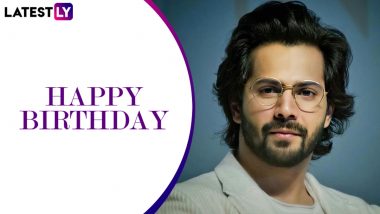 Varun Dhawan is one of the talented actors of Bollywood. He has not just won hearts with his acting prowess, but also with his exceptional dancing skills. Ever since VD (as he is fondly called by his fans) made his acting debut, he has left everyone enthralled with his choice of projects. From featuring in campus drama to thriller to rom-coms, Varun has done a varied range of roles over the years. And on the occasion of his birthday, one just can’t thank him enough for being such a wonderful entertainer. Bawaal: Check Out Varun Dhawan's Dapper Look From the Sets of His Upcoming Film (View Pics).

Varun Dhawan, who has turned a year older today, is the son of veteran director David Dhawan and Karuna Dhawan. He has not just made Dhawan family proud with his works, but Hindi Cinema too is lucky to have one such gem like him. On this special day, let’s take a look at Varun’s films that will always remain audiences’ favourite.

Student of the Year

Varun Dhawan made his acting debut alongside Sidharth Malhotra and Alia Bhatt with Karan Johar’s teen drama. He was seen as the son of a business tycoon, a popular lad of his high school and also a flirtatious youngster. VD’s performance as Rohan Nanda was hailed by the audience.

This was the second time that Varun was collaborating with Alia Bhatt. VD’s character of a flirtatious Punjabi boy who madly loves in falls with a Punjabi girl, who is about to get engaged to an NRI American doctor, was loved by all. This rom-com was lauded for the lead pair’s performances and for the heartwarming narrative.

It was a totally different avatar of VD that movie buffs witnessed on the big screen. He had ditched his easy-breezy charm for this crime drama and left an impressive remark on the audience as Raghav ‘Raghu’ Purohit.

VD portrayed as Danish ‘Dan’ Walia, an aimless hotel management trainee, in this Shoojit Sircar directorial. But life changes for him when his co-worker Shiuli (Banita Sandhu) accidently slips off the hotel’s building and goes into coma. It shows how Dan’s professional life starts drowning due to his devotion towards Shiuli.

Varun Dhawan (Mauji) and Anushka Sharma (Mamta) are seen as a newlywed couple who stand by each other through thick and thin. It showcases how Mamta supports Mauji and urges him to revive the family trade. With immense difficulties, the two deal with financial struggles and show how they manage to setup a tailoring school too.

These are some of the best films of Varun Dhawan that will always be loved by movie buffs. Here’s wishing VD a very happy birthday and many more amazing projects in the future.

(The above story first appeared on LatestLY on Apr 24, 2022 12:01 AM IST. For more news and updates on politics, world, sports, entertainment and lifestyle, log on to our website latestly.com).