Filmmaker-composer Vishal Bhardwaj is an ardent follower of tennis, and he wants to make a film based on Leander Paes and Mahesh Bhupathi. 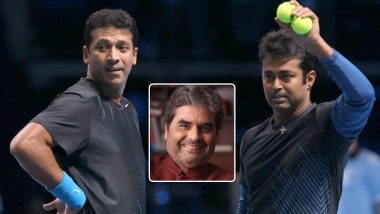 Filmmaker-composer Vishal Bhardwaj is an ardent follower of tennis, and he wants to make a film based on Leander Paes and Mahesh Bhupathi. "I am not planning to make a film on any sports person's life at the moment but I am looking forward to watch Saina Nehwal's (Badminton player) biopic which is directed by Amol Gupte. He is one of my favourite filmmakers from the country. I feel that we should definitely make a film on Leander (Paes) and Mahesh's (Bhupati) life. If I get an opportunity to make a film on their lives I would definitely make it." Saina Director Amole Gupte Says That the Badminton Star and Her Family’s Simplicity Left Him Awestruck.

Vishal spoke at the player auction of Tennis Premier League. About the league, he said: "It's a great initiative because we don't give much importance to other sports but cricket in our country. I used to be a cricket player but now, I have been playing tennis for many years. I feel it (tennis) is one of the most important and respected games in the world." "I hope the younger generation of our country would take up this sport and become well-known players like Leander Paes, Mahesh Bhupathi and Sania Mirza, who have represented at international level," he added. Saina Star Parineeti Chopra Reveals What She Does When Left Alone in Vanity Van (View Post).

On the professional front, veteran lyricist Gulzar has once again collaborated with filmmaker-composer Vishal Bhardwaj. The duo has created the tracks ‘Marenge to wahin jaakar' and ‘O re bidesiya' that will feature in Vinod Kapri's upcoming documentary film "1232 KMS". The film is about mass migration of workers and underprivileged people when lockdown was announced last year. It will start streaming on Hotstar from 24 March 2021.

Apart from that, Vishal will again collaborate with Gulzar for the film "Darlings" starring Alia Bhatt, Shefali Shah and Vijay Verma. Directed by Jasmeet Reen, "Darlings" is produced by Gauri Khan, Alia Bhatt and Gaurav Verma. Gulzar and Vishal have created memorable songs in many films including "Omkara", "Chachi 420", "Kaminey", "Haider", "Ishqiya" and "Maachis".

(The above story first appeared on LatestLY on Mar 24, 2021 02:07 PM IST. For more news and updates on politics, world, sports, entertainment and lifestyle, log on to our website latestly.com).