World Music Day 2018: 7 Underrated Songs of AR Rahman, Anu Malik, Pritam That You Should Listen to Instead of Silly Remixes and Race 3 Track Selfish!

If you are a disappointed lover of good Bollywood music like me, perhaps these 7 underrated songs from popular music composers like AR Rahman, S-E-L, Anu Malik, Pritam etc. might help as a balm to ease the pain. 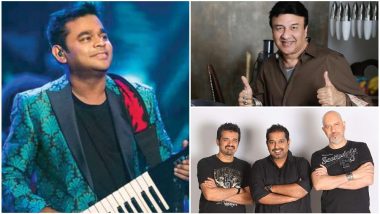 June 21 is celebrated as World Music Day, if you are not aware of this. Even though music plays such an important role in our daily lives, it is great to see a day reserved to celebrate one of the best discoveries in human existence. Now music is a phenomenon that transcends region, religion, borders, barriers and languages. It is something that a person in Brazil can enjoy when the product is composed in China. Music may have words from the local terrain, but the language is universal.

In this special feature, let's come a little closer home and talk about Bollywood. Everyone loves a good song, that touches our hearts and soothes our ears. But a good music lover is struggling in 2018, after being bombarded with remixes, stolen tunes and travesties like the Selfish track from Race 3. Gone are the days when every other album has one track that could permeate generations. It is now considered a miracle if even one song these days manage to have a shelf-life of two years. So if you are a disappointed lover of good Bollywood music like me, perhaps these 7 underrated songs from popular music composers like AR Rahman, S-E-L, Anu Malik, Pritam etc. might help as a balm to ease the pain.

Anu Malik was one of the most popular music composers in the '90s and early 2000's. Though his career has been affected with accusations of plagiarism (unfortunately, most of them true), no one can deny he has delivered some beautiful original gems, like this song from Refugee, sung wonderfully by Alka Yagnik. His score for Dum Laga Ke Haisha proved he can still compose good songs, so is Anu Malik not so relevant today?

This amazing melody, composed by the Academy Award winner, is marred by a completely unrelated visual scene (See the movie to know what I am talking about!). The best part of the song is the usage of the continuum keyboard in the final notes of the song! Just mesmerising!

Many '90s kids might have gone through a heartbreak when they learn that Jatin-Lalit, the composers who gave us fantastic scores in Kuch Kuch Hota Hai, DDLJ, Kabhi Haan Kabhi Naa, Jo Jeeta Wohi Sikander, went their separate ways. But at least, they left a gorgeous legacy to remember their time together. Like this gem above, sung by the always brilliant Sonu Nigam.

Like Anu Malik, even Pritam Chakraborthy's career has been marred by plagiarism charged. Even his wonderful score from Woh Lamhe has some lifted tracks like Bin Tere Kya Hai Jeena and Kya Mujhe Pyar Hai. But still, he has this original song to claim credit for, sung beautifully by Glenn Johnson.

Shankar-Ehsaan-Loy owns a special place in every music lover's heart, just for that incredible score they gave in Dil Chahta Hai. But for this feature, let's revisit this underrated gem from Bhaag Milkha Bhaag, that wonderfully uses folk music with classical strains. Shreya Ghoshal and Javed Bashir just elevate the proceedings with their brilliant singing.

Another popular composer jodi from the '90s, Nadeem Shravan, had not so great turn later thanks to Nadeem escaping the country after being accused of being the key player in the murder of the late Gulshan Kumar. Before that happened, they composed several lilting tracks, including the one above.

Ending the list with the inclusion of one of the last songs composed by one of the most influential music composers of Bollywood cinema - the late RD Burman. Every song in his swansong, 1942-A Love Story, is brilliant, but this one holds a special place just for those beautiful, sad and yet motivating lyrics (Javed Akhtar).

Share your list of underrated songs in the comments section below and we will use them in some of our future lists for sure!

(The above story first appeared on LatestLY on Jun 21, 2018 10:17 AM IST. For more news and updates on politics, world, sports, entertainment and lifestyle, log on to our website latestly.com).