The Zareen Khan and Anshuman Jha-starrer Hum Bhi Akele, Tum Bhi Akele, which was scheduled to release in February, will now open in March or April. 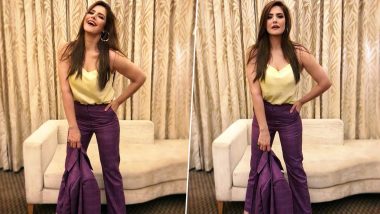 The Zareen Khan and Anshuman Jha-starrer Hum Bhi Akele, Tum Bhi Akele, which was scheduled to release in February, will now open in March or April. Directed by Harish Vyas, Hum Bhi Akele, Tum Bhi Akele is a mainstream Bollywood film with a gay man (played by Anshuman) and a lesbian woman (Zareen) leading the narrative. The film won Best Film award at its world premiere in New York at the HBO South Asian Film Festival in December, and Harish won Best Director at its India premiere at the Rajasthan International Film Festival in January this year. Vijay Deverakonda’s Co-Star Ananya Panday to Start Shooting for Puri Jagannadh Directorial from This Date

The film was scheduled to hit the theatres on Valentine's Day. "We had a worldwide release planned in February, but since we have had such a good beginning at the festival circuit, we did not want to miss out on the festival grounds especially the biggest LGBTQ festivals in the world which happen in March," Harish said while explaining the reason behind changing the release date. Kartik Aaryan To Star In Tanhaji: The Unsung Warrior Director Om Raut’s Big Budget Heist Drama.

"Also, we did not wish to release another big film. Anshuman also completes a decade as an actor in the industry in March so it will release in March end or April. There will be an official announcement on the new release date soon," he added.

(The above story first appeared on LatestLY on Feb 12, 2020 08:19 PM IST. For more news and updates on politics, world, sports, entertainment and lifestyle, log on to our website latestly.com).