Priyanka Chopra's production released the first Marathi Netflix original titled Firebrand and here's what it's all about. 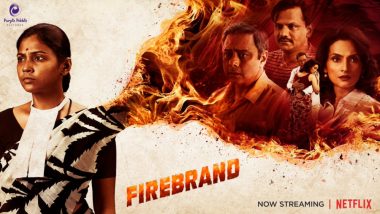 Priyanka Chopra's Purple Pebble Pictures recently released the first-ever Netflix original in Marathi titled Firebrand. The film starring Marathi cinema's big names such as Usha Jadhav, Girish Kulkarni, Sachin Khedekar, and Rajeshwari Sachdeva. Directed by Aruna Raje, Firebrand started streaming on Netflix from February 22 and ever since, has been generated some mixed responses over the internet. With a stellar cast that leaves no space making a brave impact, it is Fireband's contemporary relevance that comes across as its biggest highlight.

What is Firebrand about?

While the name Firebrand suggests someone fierce, in this case, it defines the lead protagonist Sunanda (ably played by Usha Jadhav), a divorce lawyer who stands up for women's justice and often relishes beating her male opponents on cases. On the professional front, Sunanda's character is the classic cinematic representation of a feminist. Her personal life though is crippled by the demons of her past. After being sexually abused as a child, Sunanda is shown to have got on with her life and is even married to her close friend but she's never really healed emotionally and that's affecting her physical intimacy with her husband. The film shuttles between her personal and professional life as she tries to find closure in order to truly move on. Priyanka Chopra Says 'Proud Moment For Me' As Her Production's Marathi Original 'Firebrand' Streams On Netflix.

Here's the trailer of Firebrand:

Not many films in India have focussed on the life of sexual abuse survivors post the incident without taking the revenge drama angle. In terms of that, Firebrand chooses the right theme and even blends it with related faculties such as moralities of love and sex and most importantly the role of intimacy in a marriage. The film ticks the right boxes when it comes to opening up dialogue even if it touches merely the surface.

Apart from the protagonist, it is the husband's character that comes as a breath of fresh air in terms of representation. His supportive, non-judgemental demeanor is rare and praiseworthy. For a film that does outrightly pose as a feminist drama, there's also Rajeshwari Sachdeva's character (Sunanda's client for divorce) which looks at the other side, despite remaining slightly underveloped in the plot.

For Netflix's foray into Marathi originals, Firebrand seems like a great start. There is still space for technical improvement with a more refined dialogue but there's no denying that for a Marathi-speaking audience, the film will still leave quite a strong impact. Priyanka Chopra's Hollywood Film Isn't It Romantic to Stream on Netflix on Feb 28 - Watch Video

Given that the film has already become a talking point on social media is reflective of the fact that there is an audience for such content and while theatrical releases may require much bigger budgets, it is production houses like Purple Pebble Pictures who must back these projects.

(The above story first appeared on LatestLY on Feb 23, 2019 04:05 PM IST. For more news and updates on politics, world, sports, entertainment and lifestyle, log on to our website latestly.com).