Out of the many revelations made by the stars, the highlight however became Jennifer and David's confession about having a crush on each other. When host, James Corden, asked whether any of the cast members of the hit NBC sitcom ever engaged in off-screen romances with each other, Aniston confessed that David had a crush on her. 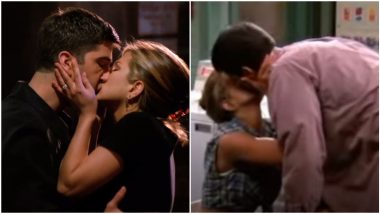 The Friend: The Reunion special was no less than a nostalgic trip where we saw the cast discuss everything that had happened on the sets of the show. From talking about the most iconic scenes to discussing their lives after Friends, we saw Jennifer Aniston, David Schwimmer, Lisa Kudrow, Matt LeBlanc, Matthew Perry and Courteney Cox bring back so many memories all at once. Friends Star David Schwimmer Settles Ross and Rachel's 'We Were on a Break' Debate on 'The Tonight Show' Once And For All!

Out of the many revelations made by the stars, the highlight however became Jennifer and David's confession about having a crush on each other. When host, James Corden, asked whether any of the cast members of the hit NBC sitcom ever engaged in off-screen romances with each other, Aniston confessed that David had a crush on her. "I mean, in the first season, I had a major crush on Jen. At some point, we were crushing hard on each other. But it was like two ships passing, because one of us was always in a relationship and we never crossed that boundary. We respected that," Schwimmer admitted.

This scene is one of the best ones. Ross is with Julie when he finds out that Rachel likes him back. He tries to do the right thing and stay with Julie, but is not ready to let go of Rachel. They have a fight, after which they share their first kiss.

When Ross Finds Out That Rachel Likes Him Back

This is right before the kiss. Rachel is on a date when she gets drunk and calls Ross to tell him that she is over her. Ross hears her message and has the sweetest reaction to Rachel's confession.

Ross and Rachel's Break Up

You will be lying if you tell us that you did not cry during this episode. Jennifer and David made this breakup scene look so real that we actually felt that it was someone close to us parting ways. The emotions were so real that we think no other actor could have been able to pull off this scene so effortlessly.

When Rachel Told Ross She Is Pregnant

Ross had the most real reaction, but he soon was able to take control of the situation and assure that he will help Rachel with everything. Rachel and Ross's understanding is at its best during this scene. FRIENDS The Reunion: Fact Check! Jennifer Aniston Was Wrong About Ross and Rachel’s First Kiss in Central Perk – Here’s Why! (LatestLY Exclusive).

When Rachel Gets Off The Plane

And lastly, the most important scene. Rachel has taken a plane to fly to Paris but Ross had confessed his feelings for her. He is waiting to see if she comes back and gets off the plane when the message she had sent ends. We all are waiting to know what happened when she says, "I got off the plane." and everyone cried happy tears.

Off-screen, Schwimmer married English artist Zoe Buckman in 2010; the two split in 2017. The former couple remains on good terms as they co-parent their 10-year-old daughter, Cleo. Aniston was married to Brad Pitt from 2000 to 2005. She split from second husband Justin Theroux in 2018 after more than two years of marriage and nearly seven years together.

(The above story first appeared on LatestLY on May 28, 2021 03:59 PM IST. For more news and updates on politics, world, sports, entertainment and lifestyle, log on to our website latestly.com).