Hollywood star Jack Whitehall has shared that he was told to bulk up by his agent after showing his "pallid, flappy body" in an upcoming movie. 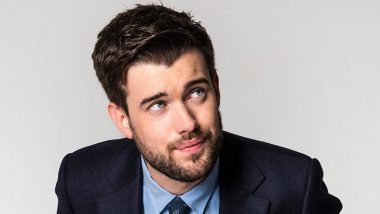 Hollywood star Jack Whitehall has shared that he was told to bulk up by his agent after showing his "pallid, flappy body" in an upcoming movie. Speaking on the Manatomy podcast, Whitehall said: "I watched the first cut of a movie I did this year, and there's a sequence when I'm stripped and my clothes are ripped from me. My agent said, 'The movie's great - but you have really got to hit the gym. To be a really successful actor in this town, you've got to hit the gym. When Jack Whitehall Dislocated a Rib Working Out With His Jungle Cruise Co-Star Dwayne Johnson.

"He had been watching through gritted teeth thinking, 'Oh my God, why does my client look like that? Why is he so unashamedly willing to present that body to the world?" The comedian added: "It hadn't crossed my mind. I'd watched my pallid, flappy body lolloping around and thought, yeah that's funny." Despite his agent's criticism, Whitehall says he is not "ashamed" of his body and is willing to get his kit off if it makes people laugh, reports femalefirst.co.uk. Clifford the Big Red Dog Movie Review: Jack Whitehall’s Film Is a Soulless Adaptation That Is More Frustrating Than Entertaining (LatestLY Exclusive).

The 'Jungle Cruise' star said: "I'm very willing to get naked for a laugh, and make myself look quite vulgar. I'm not ashamed of my body. It's funny to shove yourself down into the dirt and humiliate yourself for a laugh." He has forged a successful movie career but previously confessed that his old jokes could lead to him being cancelled by Hollywood. The actor said: "I feel like I've definitely said jokes in the past that would be worthy of cancellation. I guess it's how you weather that storm if it does ever come up.

"I've had it, sort of, occur a few times and I think, maybe, people are a little better now. We've had a few of these ridiculous cancellations of people because of historic jokes that especially with a comedian because it was told in jest and the context of it was only ever intended as a joke that you do tend to get away with it a little bit more. "More so than you might with a tweet or a comment in an interview."

(The above story first appeared on LatestLY on Jan 21, 2022 03:25 PM IST. For more news and updates on politics, world, sports, entertainment and lifestyle, log on to our website latestly.com).