Adam Driver Birthday Special: From Star Wars The Force Awakens to Marriage Story, 5 of the Kylo Ren Actor’s Best Films According to IMDb

Over the years he has racked up a filmography that’s so impressive. Driver has constantly done films that have something to say and not just be mindless entertainment. From showcasing a failing marriage in Marriage Story to taking down the KKK in BlacKkKlansman, Driver’s work speaks for itself. 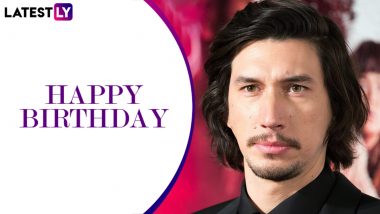 Adam Driver is one of the most versatile and talented actors in Hollywood working today. Getting worldwide recognition after the release of Star Wars: The Force Awakens in 2015, Adam Driver has constantly given one great performance after the other. He is genuinely an extremely talented actor who understands the assignment and gives it his all. House of Gucci Trailer: Lady Gaga, Adam Driver’s Fashion Murder Drama Based on True Events Looks Fascinating (Watch Video).

Over the years he has racked up a filmography that’s so impressive. Driver has constantly done films that have something to say and not just be mindless entertainment. From showcasing a failing marriage in Marriage Story to taking down the KKK in BlacKkKlansman, Driver’s work speaks for itself. Whatever film he stars in, he makes sure to steal it. So to celebrate Adam Driver’s 38th birthday, we are taking a look at five of his best films according to IMDb.

Paterson sees Adam Driver portray the role of a bus driver and a poet named, you guessed that right, Paterson. Paterson is a breathtaking indie film that sees Driver give an amazing performance. The film was lauded on release for just how refreshing and entertaining it was.

This Spike Lee joint sees a black detective try and take down the KKK alongside his partner. Adam Driver plays the role of Philip Zimmerman, a Jewish detective, who infiltrates the KKK in the disguise of a Christian person. The film was acclaimed for how it tackled racial themes and the chemistry of its two leads.

A historical drama that tells the story of a knight challenging his squire, after the knight’s wife accuses the squire of raping her. The Last Duel was a challenging but rewarding watch that tells this haunting tale. Driver plays the role of the squire in a performance that will definitely sit with you for a while. The Last Duel Trailer: Matt Damon and Adam Driver Have an Epic Face-Off in This Medieval Saga (Watch Video).

Picking up 30 years after Episode 6, Star Wars: The Force Awakens follows Rey and Finn as they try to take down the First Order as a new evil is on the rise. The Force Awakens was a return to form for Star Wars and one that brought back all of your fan favorite legacy characters in a spectacular way.

Marriage Story directed by Noah Baumbach is a deep look that showcases the falling apart of a marriage and how the family still tries to stay together. Adam Driver and Scarlet Johansson put on a stellar performance that will pull you into the film right away. Marriage Story is both of these actors at their best.

Adam Driver is a great actor and one that we can’t wait to see more of. Whatever he does next, we will definitely be there on the first day. With this we finish off the list and wish Adam Driver a very happy birthday.

(The above story first appeared on LatestLY on Nov 19, 2021 09:50 AM IST. For more news and updates on politics, world, sports, entertainment and lifestyle, log on to our website latestly.com).