Avengers Endgame: Here's Your Chance to See All the Deleted Scenes from Marvel's Biggest Superhero Outing 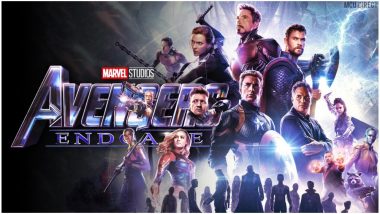 Avengers Endgame is officially the highest-grossing movie of all time and it recently dethroned James Cameron's Avatar to bag the honour. It was a delight for all superhero fans to finally see an end to this glorious chapter that we started reading way back in 2008. From Iron Man's death to Black Widow's big sacrifice, this movie was nothing short of an emotional roller coaster. Ask us to keep watching this film for days to come and we'll willingly accept the invitation without giving any second thoughts. The more we see, the less it will be for us. And the recent release of these deleted scenes by Marvel? Well, it's like a cherry on the cake. Avengers: Endgame, Infinity War, Jurassic World: These Are the Top 5 Highest-Grossing Hollywood Movies in India.

Recently we had an opportunity to witness a heroic tribute that Avengers gave Tony Stark after his sacrifice on the battlefield. The deleted scene was recently released online and we had a lump in our throat every time we played that video. If that was a jackpot, what will you say about these additional deleted scenes that are out on the internet right now? From Tony Stark shaving off a patch of Rocket's hair to War Machine trolling Captain America, these scenes are a must-watch. Some are hilarious and others are damn cute. Check 'em out right below... Avengers Endgame Fan Has Watched the Marvel Movie THIS Mind-Boggling Number of Times.

This was shot right before Steve Rogers, Natasha Romanoff and Scott Lang come to meet Tony to discuss the Quantum Realm.

During a scene when the surviving Avengers gather to discuss their plan, Rocket trolls the team for fearing Chitauri. In the middle of his trolling, Tony walks up and shaves a stripe into the back of his head.

The brief scene where Tony has a fulfilling chat with his father, Howard Stark, the latter offers him a job. He asks 'Potts' if he's willing to come and work for him which Tony rejects obviously.

While Rocket is trying hard to find the Reality Stone, Thor is busy relieving himself in his old palace.

In his brief chat with Captain America aka Steve Rogers, War Machine asks him why he didn't jump off the plane before crashing it? Ever wondered?

This scene is out already and enough has been spoken about it. So we'll leave it to that.

Did these videos bring a big broad on your smile? Well, it surely worked for us and we can't wait to get hold of its Bule-Ray version that's out already. Avengers: Endgame will go down in history as one of the most entertaining films of all time (for us at least) with such a stellar star cast. We are already watching these deleted scenes on loop and we bet you are going to do the same.

(The above story first appeared on LatestLY on Jul 30, 2019 11:51 PM IST. For more news and updates on politics, world, sports, entertainment and lifestyle, log on to our website latestly.com).