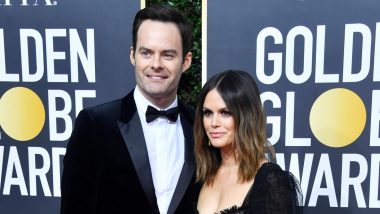 Bill Hader and Rachel Bilson had hit the headlines after they made their debut red carpet appearance at the Golden Globes 2020. The couple apparently also took a Valentine's Day vacay recently but thins seemed to have gone south amid lockdown for the duo. If recent reports are to go by,the couple have called quits. As reported by E! news, Bill and Rachel have parted ways after dating for a few months. The portal suggested that their break-up has left Bilson "devastated". There hasn't been confirmation about their break-up from either of the two as of yet. Armie Hammer and Elizabeth Chambers Announce Separation After 10 Years Of Marriage.

Although reports have suggested that Bill and Rachel have split on amicable terms. The couple had first sparked rumours of being together after they were spotted at a Tulsa Starbucks in December 2019 and later in the month, at a Los Angeles Ralph’s. Hader recently divorced his former wife Maggie Carey in 2018 after 11 years of marriage. Hader shares three daughters—Hannah, 10, Harper, 7, and Hayley, 5 with Carey. Rachel Bilson and Bill Hader Are Brewing A New Romance, Spotted On A Coffee Date in 'Barry' Star's Hometown.

As for Bilson, the OC actress was formerly linked to The Bachelor's Nick Viall. Rachel is split from Hayden Christensen after being together for 10 years in 2017. It certainly doesn't seem to be a good time for celebrity couples at the moment given that we recently reported the news of Call Me By Your Name actor Armie Hammer's separation from wife Elizabeth Chambers after 10 years of marriage.

(The above story first appeared on LatestLY on Jul 11, 2020 12:22 PM IST. For more news and updates on politics, world, sports, entertainment and lifestyle, log on to our website latestly.com).