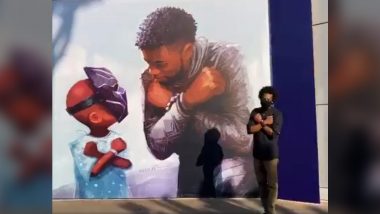 California's Disneyland on Thursday (local time) unveiled a powerful mural titled - 'King Chad' - of the late actor Chadwick Boseman at the Downtown Disney District at the Disneyland Resort. According to The Hollywood Reporter, the mural has been designed by writer and concept artist Nikkolas Smith. The artwork displays the Marvel star exchanging a Wakanda salute with a young fan wearing the 'Black Panther' mask. Smith took to Instagram to share a picture of the mural and penned down a note in remembrance of the departed actor. Emmys 2020: Chadwick Boseman, Naya Rivera and Others Honoured by H.E.R in the Memoriam Performance

"This one is special. My King Chad tribute is now on a wall on display at Downtown Disney. It is a full-circle moment for me: my final two projects as a Disney Imagineer last summer were working on the Children's Hospital project and the Avengers Campus," he wrote in the caption. "To millions of kids, T'Challa was a legend larger than life, and there was no one more worthy to fill those shoes than Chadwick Boseman. I'm so thankful to be able to honour Chadwick's life and purpose in this way. I am grateful to the Disney family for being so supportive of my journey as an artist," he added. Chris Evans’ ‘Vote On Nov 3rd’ Post Becomes The Most Liked Tweet Of The Actor After His Eulogy For Chadwick Boseman

The unveiling of Chadwick Boseman’s Black Panther Mural at Disneyland

.@Disney unveiled its mural dedicated to Chadwick Boseman at the Downtown Disney shopping and dining district at Disneyland. pic.twitter.com/UZC81UBiZ6

As reported by Variety, the child in the mural is seen wearing a hospital gown, to honour the late 'Black Panther' star who visited the St Jude campus to meet children suffering from cancer while waging a private battle with the disease.

Boseman was diagnosed with colon cancer in 2016. He kept his condition private and continued filming while being treated. On August 28, 2020, Boseman died of the complications associated with illness, at the age of 43.