America listens to Captain America a lot it seems. Chris Evan's Vote On November 3rd Tweet is his most-liked tweet ever. 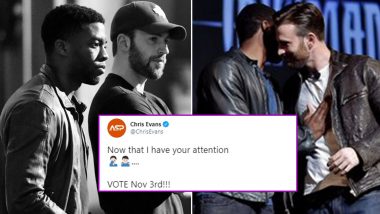 Chris Evans recently was in the news for an NFSW reason. A nude pic of the actor suddenly showed up on his Instagram account making everyone go crazy. The actor has reacted to the pic now. But that's not what this story is about. While we were stalking his Twitter feed which always propagates just causes, we found that two of his tweets were in a contest to become his most liked ones. The first one was his heartfelt and 'heart-breaking' eulogy for Chadwick Boseman after the latter's demise. The second one was his recent tweet where he requests everyone to go vote on November 3. Chris Evans Reacts to His Photo Leak Incident, Says ‘It’s Embarrassing, But You Gotta Roll With The Punches’

The tweet on Boseman's honour got 1 million likes so far and the other one has already exceeded that mark. It is presently on 1.1 mn and in all likelihood, it is going to receive more and more likes. It seems people take Captain America's words very seriously. Check it out here...

Now that I have your attention

Here's his ode for Boseman...

I’m absolutely devastated. This is beyond heartbreaking.

Chadwick was special. A true original. He was a deeply committed and constantly curious artist. He had so much amazing work still left to create. I’m endlessly grateful for our friendship. Rest in power, King💙 pic.twitter.com/oBERXlw66Z

Many consider Chris' vote tweet a way of salvaging his image after the 'accidental' leak on Instagram. The actor even puns on it and turns it into a message that holds a lot of merits.

(The above story first appeared on LatestLY on Sep 16, 2020 04:16 PM IST. For more news and updates on politics, world, sports, entertainment and lifestyle, log on to our website latestly.com).