A week ago, Chrissy Teigen had paid a tribute to her late son Jack on his original due date following the miscarriage she suffered last September. The 35-year-old star took to her Instagram handle and paid the tribute to her baby on what would have been his due date. 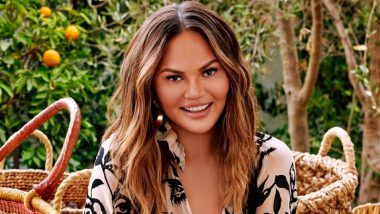 Chrissy Teigen went through something very tragic last year when she lost her baby to a miscarriage. She was very vocal about the horrific incident and talked at length about her journey. She is often seen talking about her baby on social media as well and her fans feel nothing but pain for her. The model has slowly been trying to recover from this tragic loss and is often seen taking jibes at different things, talking about food and spending time with her kids and family. But while Chrissy is trying to overcome this loss, some social media users make sure to test her from time to time. Chrissy Teigen Shuts Down A Troll Who Asked Her to Cover Her Breasts In Front of 3-year-old Daughter Luna!

A Twitter user made sure she makes a distasteful comment on Chrissy's miscarriage. The person wrote a message for the model saying that she is glad that Chrissy has stopped using her 'terrible miscarriage as a means to keep promoting' herself. Chrissy made sure she gave it back to her and did it in the most subtle manner. She retweeted the message and wrote that she would anything to please her. A follower of Chrissy went on to say in the comments, "It’s incredible to me that anyone thinks someone with 13.7million followers is wasting time thinking up ways to “promote themselves.”."

anything to please you, Katie https://t.co/D9oWxxdKBj

A week ago, Chrissy Teigen had paid a tribute to her late son Jack on his original due date following the miscarriage she suffered last September. The 35-year-old star took to her Instagram handle and paid the tribute to her baby on what would have been his due date. Teigen honoured Jack by sharing a photo of her wearing a bracelet with his name on it, alongside two similar bracelets with the names of her daughter Luna Simone, and son Miles Theodore. Model Chrissy Teigen Shares Photo of Her Vaginal Steaming: What Is It & Is It Safe?

Previously in September, Tiegen had announced that she and her husband John Legend had lost their third child in an emotional social media post. Teigen has been open about her grieving process since she lost her son Jack at 20 weeks gestation. As per People magazine, earlier this month, the model even appeared on The Ellen DeGeneres Show and spoke about how her pregnancy loss was a "transformative" experience for her.

(The above story first appeared on LatestLY on Feb 28, 2021 01:08 PM IST. For more news and updates on politics, world, sports, entertainment and lifestyle, log on to our website latestly.com).