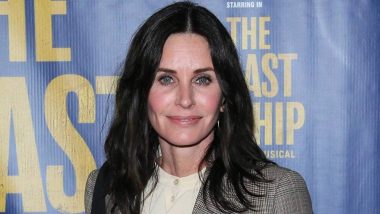 Friends star Courteney Cox is returning for the next iteration of the famed 'Scream' film franchise. According to Fox News, the 56-year-old actor confirmed that she will reprise her role as news reporter Gale Weathers in an Instagram post on Friday (local time). With the Instagram post, the 'Bedtime Stories' actor posted of the iconic black-and-white mask that has seen many Halloween nights over the course of its four films that began in 1996 and have grossed more than USD 600 million in the global box office. Courteney Cox Sends Virtual Birthday Wishes to Boyfriend Johnny McDaid, Says ‘COVID Sucks’ For Keeping Them Apart from Each Other for 133 Days

"I can't wait to see this face again," noted Cox as she also slated to return for the fifth instalment is Cox's ex-husband David Arquette as Dewey Riley.nArquette previously said in a statement, according to The Hollywood Reporter, "I am thrilled to be playing Dewey again and to reunite with my Scream family, old and new. Scream has been such a big part of my life and for both the fans and myself, I look forward to honouring Wes Craven's legacy." Benedict Cumberbatch, Courteney Cox and Zac Efron Among 35 Celebs to Be Honoured in Hollywood Walk of Fame 2021

Fox News reported that Cox has marked her appearance in all of the previous 'Scream' films, released in 1996, 1997, 2000 and 2011 respectively.nRadio Silence, the filmmaking arm behind the reboot told the Deadline, "We can't imagine 'Scream' without the iconic Gale Weathers and are so incredibly thrilled and humbled to have the opportunity to work with Courteney. We're absolute mega fans of her work and we're so excited to join her in the next chapter of the 'Scream' saga!" Filming on the all-new 'Scream' is set to kick off later this year in Wilmington, North Carolina.