Darren Aronofsky Birthday Special: From Requiem for a Dream to Mother!, 5 of the Director’s Most Emotionally Taxing Films!

To celebrate Darren Aronofsky’s 53rd birthday, we are taking a look at five of his most emotionally taxing films. 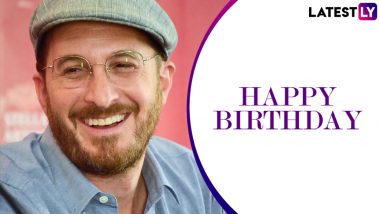 Directors usually are very identifiable by their style, and Darren Aronofsky has one of the most distinct visual styles. Aronofsky makes films that explore the human mind. Sometimes it explores obsession, addiction or breaking down of one’s self and has very heavy themes that can make his films difficult to watch. Take Requiem for a Dream for example, it’s a great film that explores drug addiction, but it’s something I never wish to watch again. Brendan Fraser to Play a 600-Pound Recluse in Darren Aronofsky’s The Whale.

Aronofsky really is great at making the audience feel claustrophobic. His films can at many times make you feel trapped. That’s what makes it so haunting to watch and I don’t think any other director does that better than Aronofsky. So to celebrate Darren Aronofsky’s 53rd birthday, we are taking a look at five of his most emotionally taxing films. Jared Leto and Darren Aronofsky to Re-team for Adaptation of 'Adrift'.

Aronofsky’s directorial debut, Pi focuses on a mathematician obsessed with finding how math is connected to the universe. Featuring an engaging performance by Sean Gullette, the movie is a captivating deep dive into a man’s obsession.

Mickey Rourke’s finest performance yet, The Wrestler explores a professional wrestler at the tail end of his career, who despite his failing health wants to re-experience his glory days. It’s a sad film that genuinely gets you invested in the story of this character and will leave you in tears by the end.

Black Swan is another film about obsession, obsession of being perfect. A dancer obsessed with achieving greatness, she finds herself competing for a role and slowly losing herself and descending deep into madness. Featuring powerful performances from Natalie Portman and Antonio Banderas, it surely is a harrowing watch.

Mother! is basically a film that will leave you with severe anxiety. After a peaceful life of a couple is disrupted by a couple of strangers knocking on their door, Mother! will take you on a thrill ride from start to finish. Jennifer Lawrence gives a career defining performance that will have you rooting for her throughout.

One of the best films I never want to watch again, Requiem for a Dream follows four characters addicted to drugs and how they constantly ruin their life. Aronofky frames the scenes in such a haunting way that it really sells the threat of drug addiction and how it affects a person.

Honestly, can’t wait for Darren Aronofsky’s next project because he not only pushes himself, but the audience too. With this we finish off the list and wish Darren Aronofsky a very happy birthday.

(The above story first appeared on LatestLY on Feb 12, 2022 10:59 AM IST. For more news and updates on politics, world, sports, entertainment and lifestyle, log on to our website latestly.com).