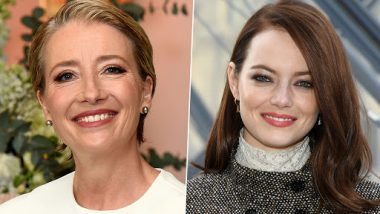 Washington DC: Emma Thompson is in talks to join Emma Stone in the upcoming Disney live-action 'Cruella'.Set in the early 1980s, Stone will play the role of infamous fashionista villain Cruella De Vil, who hates dogs and covets the furs of 101 Dalmatian pups to design a perfect coat for herself. The villain was first seen in the 1961 animated classic '101 Dalmatians,' played by Hollywood actor Glenn Close, who was recently seen in 'The Wife'.The exact details of Thompson's character are not clear. Disney CEO Hints About All The Marvel Movies To Expect After Avengers: EndGame and Spider-Man: Far From Home

The upcoming origin story has been penned by Tony McNamara and is scheduled to release on December 23, 2020, Variety reports. The direction of the film is being handled by Craig Gillespie, Marc Platt, Kristin Burr, and production by Andrew Gunn. Thompson is not new to the world of Disney. Her past credits include multiple Disney films including, 'Beauty and the Beast' (2017), and 'Saving Mr Banks' (2013). Disney Announces Release Schedule: Avatar 2 Pushed to 2021, New Star Wars Trilogy to Kick Off in 2022

Apart from these Disney films, the actor's past credits include an impressive list of films, including 'The Children Act', 'Brave', 'A Walk in the Woods' and 'The Love Punch'.The actor will be next seen in Amazon Studios comedy 'Late Night' and 'Men in Black: International'.